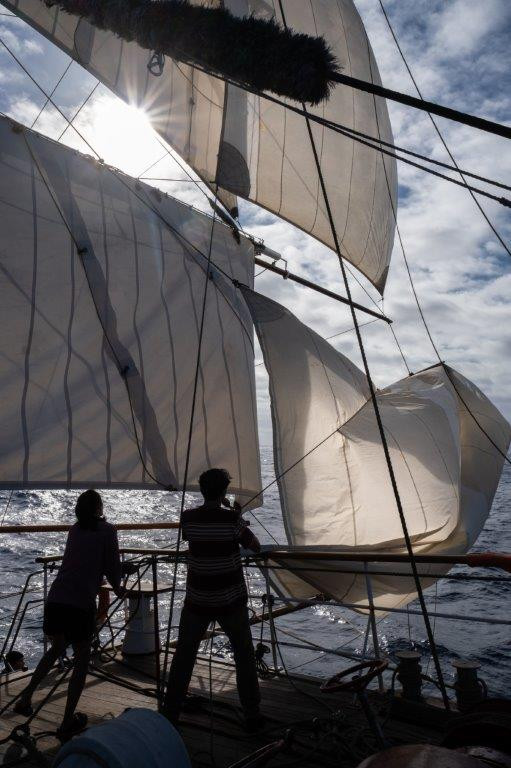 South Atlantic and Indian Ocean albatross, the beautiful Yellow nosed breeds in Tristan da Cunha archipelago and a handful of other remote islands further south. Their dispersal movements are not fully known, but generally they fly for long distances from there to sub Antarctic to subtropical waters, reaching Rio de la Plata and the close by latitudes where the Europa sails those last couple of days.

Another great traveler endemic from Inaccessible Island (Tristan da Cunha group), the Spectacled petrel, showed up today as well. From their small nesting island, these birds can disperse all over the Southern ocean and following the Brazilian and Benguela currents along both the South Atlantic eastern and western boundaries.
Not much birdlife could be seen around us, but nevertheless these couple of species mentioned represent great and rare sights, exciting for the birdwatchers interested on oceanic birds from remote areas.

While they were showing up now and then during the day, first sure they saw us getting Studding sails ready and setting the three of them that during the morning ended up flying at our portside. Then, once the sailhandling is done, a look through the library portholes probably revealed them some people in protective equipment applying a layer of Top coat paint. If they had a glimpse on deck on their gliding flight around the ship, definitely they spotted some hands sanding and varnishing wooden appliances.

A look aloft offered them views of crew members swapping old blocks for newly refurbished ones, replacing old buntlines or furling Staysails. Also somebody else was around up in the rig, notebook in hand and with her scrutiny looks, our Bosun check the rigging and writes and writes maintenance still to be done. With Montevideo laying scarcely 650nm ahead of us, not many days are left for it, as from the end of this trip onwards, maintenance is reduced to minimum while sailing the windy and cold waters further south.


Whilst we were heavy labouring, it was curious to see how the Albatross with its widely expanded wings, glided right up the wind.
- Charles Darwin on board HMS Beagle (1833)


But for the moment, with already over 4000nm at her back, Europa has sailed 136nm during the last day, and now, with the wind from the aft in the easing breeze, she slows down a bit, doing between 3 and 4.5kn. That allowed for continuing with the scientific projects hosted on board for the Atlantic crossing. First, the Manta trawl, looking for and collecting micro plastic, was deployed for three half hour trawls during the day. A first look at the contents of the net revealed a successful trawling, unfortunately for the oceanic environment again containing plastic samples on it. In the nighttime, sailing below the constellation of the Southern Cross, the plankton net for the bioluminescence study glows in the surface waters while trawling at our starboard side.

Soon reaching the end of the trip, in the next days will be the time to start putting together what the samples collected could tell us. The characteristics of their contents correlated with the positions where they were taken, water temperature and salinity, speed of the ship and oceanographic currents represent an amount of new data to chew over it, to build and interpret. Another piece in a seemingly overwhelming prodigious puzzle to help increasing and improving our knowledge of the oceans, their tiny creatures and overall effects humans are having on it.


Whenever you start working on something, you have to go about it with the underlying assumption that this puzzle has a solution, right? If you started a jigsaw puzzle not knowing whether all the pieces were in the box, it would not be a fun exercise.
- Boyan Slat