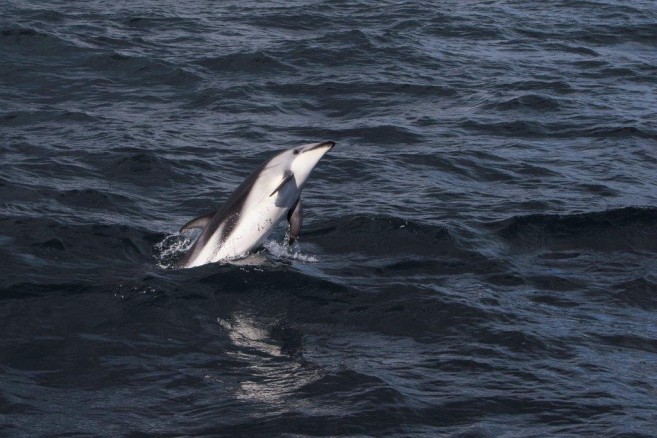 This morning, Europa departs under the command of Captain Klaas and his Mate Jelte with their permanent crew of 17 and 40 voyage crew, provisioned for 7 weeks of Polar and temperate seas and lands. As the moorings are casted off, crew waves goodbye to the off-signing ones after a big working personnel changeover after the last Europa trip to Antarctica. Some of them will re-join the ship in Cape Town, others we sure will meet somewhere at some time, sailing the oceans of the world.

Sun shines while we start leaving Ushuaia behind, not to be in a city again until the end of April when our arrival to Cape Town is scheduled.

Many activities were planned for today, as the crew wants to use the quiet waters of the scenic Beagle Channel to conduct all the instructions, familiarizations and trainings. All before we start our watches and we hit the legendary open waters surrounding Cape Horn and the Drake Passage. For the crew it is a day of teaching, sea stowing and setting up properly some navigational instruments to aid our navigation through the southern seas.

With the mandatory Argentinean pilot on board, we use our engines on the variable winds that characterize the area, but soon we all hope for the wind to allow us setting canvas and stop the engine. This will not happen until close to midnight, when all the canvas we set during the afternoon pull the Europa Southwards on a great sailing night.

But before that, many activities had to be done. First, we must attend the Safety Instructions prior to start any sailing trip, then the voyage crew is split into their three watches and crew members introduce their duties on board during the sailing periods between the planned landfalls: line handling and deck-work, steering and lookout. Rig climbing instructions are also necessary if we aspire to go aloft to help the crew furling and unfurling sails or just for the sake of taking a good picture.

While some short showers pass over our heads, masking the sunny skies from time to time, the Beagle Channel offers its landscapes as we sail along. The last green forests we will see during the trip frame the waterway on both sides, at our Starboard Chile, at Port, the Argentinean coasts. Those woods belong to what is called Subantarctic temperate rainforest system, with three species of southern beech trees being the main ones growing here. As we gradually leave them behind it comes to our minds that this Southern Patagonia and Cape Horn region are the southernmost forested regions of the world, and from now on the icy Antarctica is ahead of us, as the first area we plan to visit. Further away lays the tussock grass covered slopes and glaciated interior of South Georgia, and broaden our view ahead, the volcanic Tristan da Cunha.

From the beginning of our journey we had several companions already, flying over the calm waters of the Beagle Channel. Flocks of South American terns and Kelp gulls feed on swarms of Fuegian sardines, joined by countless Black-browed albatrosses and Giant petrels. Numerous King and Imperial shags flutter on their way in and out of their colonies, while surprised Magellanic penguins dive as the Europa sails on their waters.

In the afternoon, soon after the Pilot boat comes alongside to pick up the pilot, Europa starts spreading her wings to the light winds she encounters at the Eastern mouth of the Beagle Channel. First Top-sails and Courses are clewed down, followed by Top gallants and Royals. Fore Top Mast Staysail, Inner Jib, Deckzwabber, Desmond and Spanker are set as well. Light breeze blows from a W-ly direction and the help of one or engines is necessary to keep some speed.

As we are busy with our first real contact with the buntlines, clews, sheets and halyards, some curious and playful Dusky dolphins pay us a visit, enjoying the swim with us for a while. This small and robust species is widespread on the coastal waters and continental shelf of the temperate seas of the Southern Hemisphere, and use to be found in pods, reaching sometimes hundreds of individuals, cooperating for feeding or schooling fish. But today just a handful of them are really interested in us, while for hours other ones are spotted in different groups leaping off the water at the distance.

Gradually we leave the sheltered waters of the Beagle Channel behind and start facing the South Atlantic close to the Cape Horn archipelago, with the Drake Passage ahead of us. The famous Beagle Channel deserves a couple more words on it, as its discovery and mapping played an important role on the history of Patagonia, represented a great navigational feat and reinforced the duality between religious believes and science.

The Beagle Channel, this picturesque waterway that separates Tierra del Fuego from the maze of islands that build the Cape Horn archipelago, is nowadays well known both for scientists working at the southernmost Patagonia and for tourists as well.

Sailing along its famous waters, excited as we all are for the start of our ambitious voyage, we should think on the past times when between 1826 and 1830 the recently refurbished Cherokee class brig sloop” HMS Beagle”, equipped as an exploration ship, underwent a fantastic and adventurous journey with the task of charting the waters of the southern part of South America. During the trip, her Captain Pringle Stokes as result of the loneliness of command under the rigid regulations of the Royal Navy on those days, became depressed and shot himself. After leaving the vessel to Lieutenant Skyring, he brought her to Rio de Janeiro where Robert Fitz Roy was made Captain. His life makes for a fascinating story, full of adventures under sail. FitzRoy was an outstanding seaman, navigator and surveyor as he demonstrated on his many voyages. Besides this he ended up being politically involved, becoming afterwards Governor of New Zealand. One of his great feats was to be the first one who actually developed the fundamental techniques of weather forecast, invaluable since then for sailors and most helpful on saving lives and aid for safe navigations. Nevertheless, his name has remained in the shadow of the gentleman companion and naturalist on board that he took on his second voyage in command of the Beagle. Nowadays he is most renown to have been Darwin’s Captain on the Voyage of the Beagle, than for his own great achievements. This second epic voyage of the Beagle, that brought those two exceptional men around the world started on the 27th December 1831 and lasted until 1836, a trip that supposed a revolution on the scientific fields of biology and geology, where Darwin conceived his ideas of transmutation of species, conceiving his theory of Natural Selection, though he waited until 1859 before publishing it.