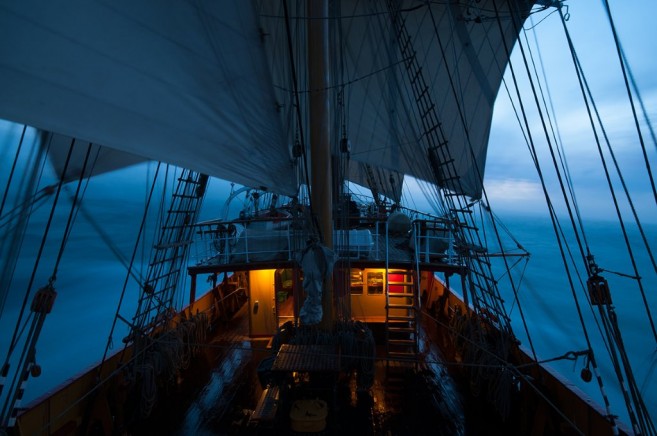 At night on the ocean it is not as dark as you might think. On Europa,  you may enjoy the night even more than the day, when it comes to the lookout duties we do during our watches. At least I do. It is hard to describe the beauty of the light effects mother nature has created for us, and some are probably hard to imagine when you have never seen them with your own eyes.

Stars
Between the sail handling or other duties on deck, there is plenty of time for stargazing. We have seen clear skies with the most magnificent starry nights. The sky of the northern hemisphere now losing more and more terrain, with Big Bear (Ursa Major) long gone and Polaris (the Northern star), slowly sinking below the horizon. Near the equator, I have developed a much better understanding of the rotation of the Earth within the galaxy, when you see the stars moving overhead during the night.

Looking at the planets and the stars, you see differences in colour. Of course Mars has its orange/red colour but there are more nuances: Sirius is in fact green and others have a blueish colour. As I understand it from some fellow sailors the southern hemisphere is even more overwhelming.

Almost forgot to mention that I'm out of wishes, since I have seen countless shooting stars. And one could argue that, in order to reach the true zen state, you should not have wishes, since they only lead to envy. But let's not get into that. I support the theory of one of my fellow sailors that the chances of your wish becoming true are increasing if you repeat it with the next shooting star.

Lightning
Currently we are sailing in the region in between the northeasterly and southeasterly trade winds on either side of the equator, where the atmosphere is unstable. It can mean either hot days with no wind or bad weather with lots of wind and rain. Especially at night squalls develop easily. This means we can see lightning almost every night. Often it looks like somebody is taking giant photos behind the horizon. But when thunderstorms are more close by, the thunderbolts are an awesome sight. Last night we had the first rain poring down on us since we left the Netherlands.

Bio-luminescence
Maybe you have seen algae lighting up at the beach, when waves are breaking in the sand. At sea, you can see the algae most of the time. At least I have seen it almost every night since we left Scheveningen. It is like fairy dust, sprinkled on the bow wave of the ship. The effect is fantastic when we are discovered by dolphins, who take a little time to accompany us. The abbreviation LED-light stands (at sea) for Light Emitting Dolphins, as the wake of their tails light up under water. The first time I saw this, about twenty years ago, I thought for a second that a submarine had fired torpedoes onto our yacht.

But it becomes even more astonishing when you see the wake of the ship, the trail we leave behind in the water. The wake is lights up most of the time by the algae, up to thirty meters behind us, sometimes with little underwater explosions, as if some crazy diver is throwing fire crackers under water. The last three nights there are glowing lights in the wake visible for several seconds, in green or blue fluorescent colours, about the size of a football. We think that it might be jelly fish, but up to now it remains unclear. No one knows what the creatures of the deep have in petto for us.

Great text from a great man Finding himself in a great time on a great sea. A sailor and a great writer is reborn not in the water but on the water. Enjoy the great opportunities of live. Hope to see you soon mate !! Greetings Ben

Nice Rienk... It seems that this trip was meant for you. You truly are a man of the sea.

Beautifully written Rienk. I think you’re inspired to wright that novel now or maybe even some songs, if not you probably never will. What a journey! Enjoy the last part of this trip and then come home safely. Your music friends are looking forward to listen to your stories and make some music. Yvonne