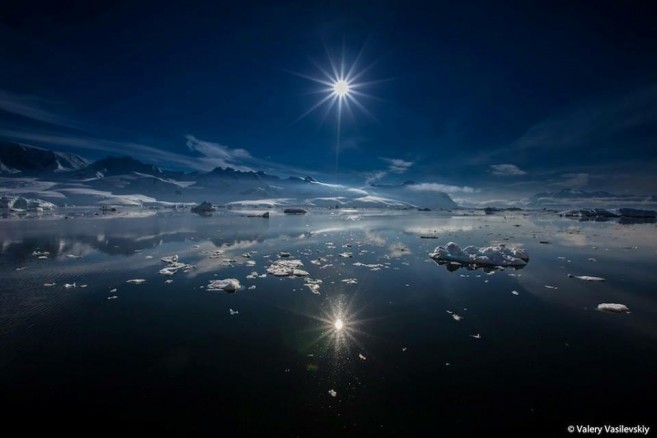 Anyone interested in seeing some ice during this Antarctic voyage? Today we had tons of ice; a little too much actually. We all know Antarctica is called the White Continent, and not without a reason. Plan A was beautiful; sailing the narrow Lemaire channel and have a combined landing at Winter Island with a visit to the Ukrainian station Vernadsky, the southern most point on the voyage.

After rounding Ulma’s Tits, two towering snow-covered black mountain rocks, the spectacular entrance of the Lemaire channel came in sight. We were making eight knots, with only the lower and upper topsails set. Suddenly we entered some brash ice and in the distance the channel looked like being filled with ice. The sails were taken down and Jordi climbed the foremast to have a better vantage point. There was not even a question whether we could try to pass the Lemaire Channel, it was completely blocked by drifting ice.

But since we always have a Plan B, and even C & D, we decided to try to reach Vernadsky through the un-surveyed Nimrod and Frenchman Passage at the northwest of the Lemaire. Captain Harko and Mate Gijs did a great job manoeuvring us through alleys of icebergs and through brash ice. All went very smoothly until we were about seven miles away from the station. Larger Icebergs appeared and once again Jordi climbed the foremast. To the west the sea was completely covered by ice. Things did not look much brighter in our heading; more and more icebergs on our path and a little further we were halted by the ice.

The whole scenery was marvellous and despite the fact that we were not able to reach Winter Island nor the station the journey was one not to be missed. Time for Plan C, return to Hidden Bay, which we passed early in the morning, and try a zodiac cruise between the icebergs. The head wind was cold we even had some light snow. Rounding Ulma’s Tits again, from the south this time and in dramatic light, to enter the bay. With sheer mountain walls and glaciers on all sides, this deep bay was not suitable as an anchor place.

Soon we were on track of Plan D, a sheltered bay on the southern tip of Doumer Island. The crossing of the Butler Passage went smoothly, leaving Puzzle Islands and Jigsaw Islands behind us with good reason. In the meanwhile maintenance work got done with the help of some voyage crew, masts were greased and woodblocks were sanded and others enjoyed watching Master and Commander in the lounge. And there we are, anchoring at the most magnificent place one can imagine. Surrounded by big glaciers and a Gentoo colony, and one big rock. Anchor watches are assigned and with our stomachs filled we can safely go asleep.