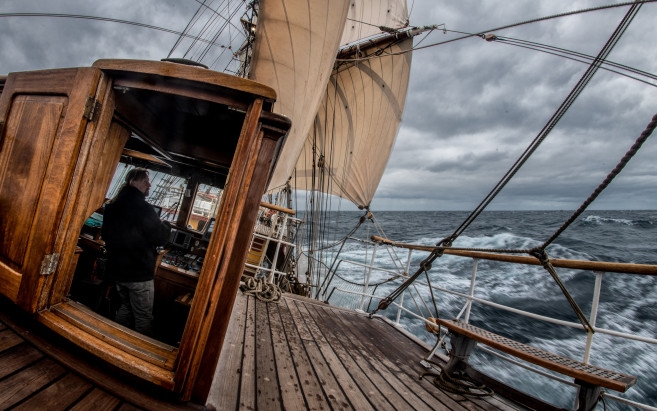 A year ago and at the beginning of the unexpected happenings that would sculpture the world until the present times, Bark Europa set her canvas to the winds of the South Atlantic to begin a long and adventurous sail to her homeport.

Manned by a team of 19 crew, she left behind a lockdown Ushuaia city to face the changeable ocean conditions along the Atlantic in a trip that lasted 81 remarkable days until doing her moorings again at Scheveningen. Uncertainty about what to expect after touching land once more, lived hand by hand with adventures, teachings and fellowship in an arguably once in a lifetime sea voyage.

Robert Peary, one of the early figures of the Golden age of Polar Exploration, reporting his highly controversial conquest of the North Pole in his 1908-1909, quoted his Greenlandic guide and companion Ootah at their return saying that “The devil is asleep or having trouble with his wife, or we should never have come back so easily”. Shared view by most of the Europa’s crew at arrival to Netherlands during last years’ mid June.

Busy at home, but longing to sail

Since then, the Europa has seen several ports in Netherlands, from Zandaam shipyard to Amsterdam city center, passing through quieter times at the Wadden Sea island of Terschelling. Many repairs and maintenance jobs have been done while others are still in progress. Not just it has been busy on board, working from up aloft to below decks, but also all the infrastructure holding and backing the ship has been engaged on trying to get through those difficult and unsettled times. Days and months when doing what we like most: sailing, teaching, involving and introducing people to the classic sailing along the world’s oceans and its remote areas, has been an out-of-question matter.

The hands-on-work aboard the ship has been walking hand by hand with the opening of new possibilities, thinking ahead and lay out plans for hopefully resuming our sailing in the near future.

Inspiring plans that drive the efforts on board of re-piping the ship, grinding, welding, rust-busting, change of corroded old steel plates, renewal of some storage areas, cabin refurbishing, carpentry, varnishing and painting amongst the countless jobs that has kept us busy for months.

"You can't get a suit of armour and a rubber chicken just like that. You have to plan ahead."

“Endurance is not just the ability to bear a hard thing, but to turn it into glory.” William Barclay