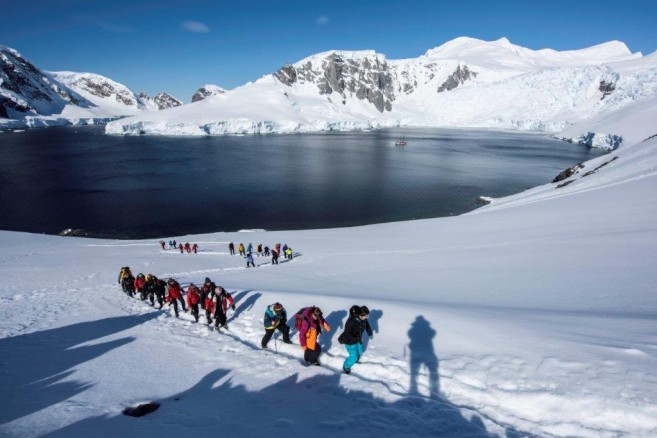 The afternoon zodiac cruise between Spert and Trinity Island was followed by a quiet evening at our spectacular anchorage, just next to the calving glacier fronts that cover the rugged island. After enjoying a long and beautiful sunset over the Gerlache Strait, we started our way southwards, with the goal to arrive at the entrance of the scenic Graham Passage by breakfast time. This narrow channel separates Bluff Island from the west coast of Graham Land, which is the Antarctic Peninsula itself. Captain Skidsmo named it after his whale catcher “Graham”, which was the first to pass through it, on March 20, 1922. Icebergs lay here and there allowing for a swift way through. Right during the morning coffee-time, we heard the engines slowing down, as we approached Nansen and Enterprise Islands, where since 1915 the “Gouvernøren” whaling vessel shipwreck rests, nested in the small cove of the same name. Her bow is above the sea level, while the aft is at about 20m underwater. She was a factory ship, catching whales in the Gerlache Strait until she caught fire in 1915. When it was clear that the fire could not be extinguished (carrying 16,000 barrels of whale
oil) the Captain decided to run her aground intentionally. The crew was rescued by other vessels working in the area and also part of the cargo was salvaged.
Captain Eric maneuvered the Europa carefully alongside the wreck without making contact. Many climbed the rig for an exceptional overview of the whole setup: glacier fronts surround the small harbor, right in the middle of it Gouvernøren’s bow is used by numerous Terns as a nesting site, while the Europa looks rather small comparing the length of both hulls. Once we were finished there, soon we are motoring through Wilhelmina Bay. Sunny and warm weather and a blue sky peppered by some high clouds made for an unforgettable passage through it. The Antarctic Peninsula mountains mirror on the calm waters, a situation that helps for spotting whales. And indeed, before lunchtime we spent some time with a mother and calf Humpback whales, which came close to the ship as
she slowly drifts. Leaving them behind we resume our way to Orne Harbour, still some miles away, expecting to arrive there during the afternoon. Orne Harbour is a pretty glaciated bay indenting the West coast of Graham Land at the tip of the Arctowski Peninsula. It is just about 1nm wide and was also one of the discoveries of Adrien de Gerlache’s expedition in 1898. On our way there the weather was good enough to even serve lunch on deck, and it didn’t change much for the rest of the afternoon, when we set foot on the steep shores of Orne, part of the Antarctic Continent itself. A path through a snow slope leads to a conspicuous rocky ridge, home for an adventurous bunch of Chinstrap penguins, who have a long climb back and forth from the shoreline down below. From there still the 285m high headland called Spigot Peak towers over our heads. The views from the saddle we climbed to are breathtaking. Anvers and Brabant Islands frame the Western side of the Gerlache Strait, which lies between them and the Antarctic Peninsula. Rongé Island with its high peaks is just in front of us, at the entrance of the Errera Channel, where Danco and Cuverville Islands are. The latter one is where we plan our evening landing. For the moment a cruise ship was busy there with their over 200 passengers. To get back to the zodiacs, we follow the same path downhill and soon we
embark the Europa in time for diner, as she slowly progresses towards the northern coast of Cuverville Island, encountering several icebergs on our way and a few Humpback whales which we have time to check properly, drifting close to them. Soon after finishing the evening meal and a short meeting with captain and guides, we were all ready to disembark in Cuverville, yet another place discovered by de Gerlache’s Belgian Antarctic expedition, and named for a vice-admiral in the French Navy. A long beach under a gentle snow slope offers an easy landing spot, on this island that is surrounded on all its other sides by steep cliffs. On its NE shores, rounded rocky outcrops stick off the snow providing good nesting grounds for one of the largest, if not the biggest, rookeries of Gentoo penguins. Usually these species breed on smaller colonies, this location being the exception to this un-written rule. This evening activity lasted a couple of hours, until we had to leave the beach at 22:00h. But it was time enough to wander around, enjoy the penguins (here still laying on their eggs, Cuverville being a more southerly location than the other colonies we visited so far) and the beautiful landscape surrounding us, bathed on the sunset light. A group of us climbed a bit higher to the nesting areas above the landing beach, for an impressive view and a bit of exercise.