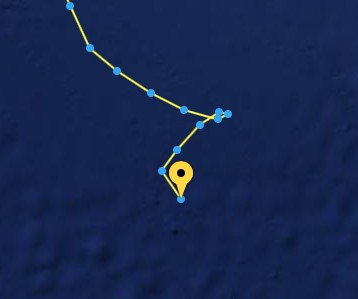 Increasing head winds and rising seas in the Roaring Forties, trying to keep in course towards South Georgia.

Getting to higher latitudes and decreasing temperature. The engine kept running the whole night as we experienced SSE strong winds reaching almost 30kn at times. The Europa fights against this conditions dealing with high seas as well. Speed drops between 1 to 2.5kn heeling to Port side with Fore Top Mast Staysail, Inner Jib, Lower and Middle Staysails and Spanker set. During the early hours of the day, still in darkness the conditions worsen a bit and we even start driftingon a ENE direction. For a while Inner Jib and Middle Staysails are taken down and we change tack to try to get a bit more progress, but quickly we realise that the new sail configuration is not really working. Sails are changed back to Starboard tack and Inner Jib, Middle Staysails and Gaff Topsails are hoisted. Europa slightly improves her stability and she is back on a Easterly course, but still at low speed motorsailing under one engine.

Today the guides talks are more directed to brief us on the Code of Conduct that we have to follow during the activities at South Georgia and Antarctica. We are getting closer and closer to the island and its time to get all the information about guidelines and the way how we operate in the Europa during our visits ashore and in the zodiacs, the priceless and fun inflatable boats used for all landings and cruises during the trip. International Association of Antarctica Tour Operators (IAATO) mandatory lectures were given twice today, with the idea of repeating it again tomorrow. In that way all of us have the chance to attend. IAATO is a membership organization of all tour operators conducting touristic activities in Antarctic areas, in order to advocate and promote the practice of safe and environmentally responsible private-sector travel to the Antarctic.

Since 1959 the provisions of the Antarctic Treaty and its subsequent agreements have governed Antarctica internationally. IAATO was created in 1991 when the Treaty Parties adopted the Protocol of Environmental Protection. This Protocol sets out principles, obligations and procedures for all human activities in Antarctica to ensure protection of the natural environment plus its scientific and aesthetic values. Under this Treaty, Antarctica is a natural reserve dedicated to peace and science. Together with this briefing the South Georgia DVD for visitors to the Island was broadcasted in the evening.

We motorsailed all day doing slow progress towards South Georgia. Both engines were running as we ride high seas under partially cloudy skies. We can feel that the temperature is dropping, thicker clothes, good sailing and foul weather equipment is starting to be seen all around. On our traditional two o’clockie meeting Klaas informed us about our progress, barely 85nm in the last 24h, still 750nm to go. He explained as well the wind and weather forecast. The small Low Pressure system that affected us with S-ly winds, reducing our speed and making us use the engines is passing by, soon giving us good sailing W-ly winds, but not for a long time as a new Low Pressure is approaching. We will need to take full advantage of those upcoming Westerlies to make good progress before the wind will back again to S-ly.

During the afternoon, still motorsailing on the conditions that had been with us for the whole day, the crew was still able to have a good time riding the bowsprit of the ship, as the big Outer Jib that has been living there until now had to be replaced by a smaller one, more suitable for the strong winds to come as we sail Southwards. The sail replaced in the Jib boom also got a rip that has to be repaired. For that, after bending it off, is carried to the library to be stitched, not before the new jib is bent-on and set. Like this we kept motoring with both engines on, doing between 4 to 5 kn on a 150º course. It was not until late night when the wind started to veer, becoming more W-ly, allowing us to start setting more canvas.

Enjoying reading your posts. Hope our son Jonathan Millhouse had a great birthday on the 27th November

G'day Mick Stewart. You still having fun, despite going backwards a couple of days ago? What's this "no Guts Watch" business??? Take care mate.

Hi Jordi and crew ! Sounds like there's still a fair way to go to SG so hoping today brings you fair weather. I know my friend Sue will be delighted with the albatross company - please say hi to her from Linda & Andrew.