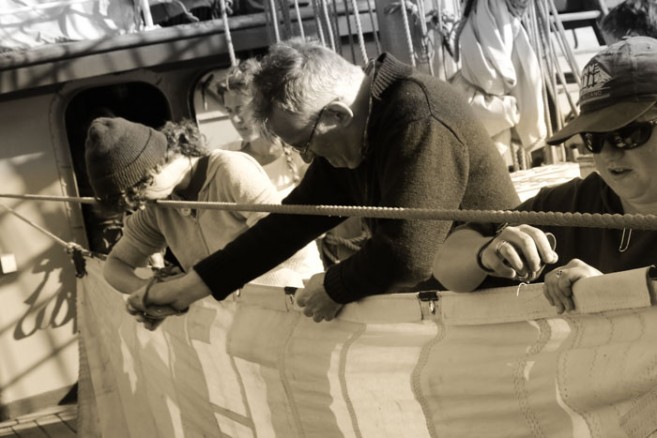 For the voyage crew who joined the ship in Cape Town, this is our 12th day at sea.

two months before the mast

Most of the voyage crew will be traveling to the Azores for a grand total of 52 days with the Bark Europa; our "two months before the mast." Before embarking on this journey, my friends and family back home was astonished by the amount of time I was about to take to sail up the Atlantic. "You'll be on a ship for two whole months. Won't you get bored?" they asked. I doubted that I'd get to that point, but I brought an e-reader along with me, just in case I found myself wanting a few good books.

In reality, I've been so busy the last 12 days that I haven't even felt the slightest urge to touch my e-reader; there is so much to do on the ship that it's impossible to imagine being bored! We have 1-2 classes a day led by the permanent crew, sharing topics from splicing lines and knot tying to the maths behind celestial navigation. We've been blessed by the company of a marine biologist on board, who has given additional presentations on deep sea creatures, research floats and the data they collect, and microplastics at sea. Our regular watch rotation provides us time to steer by compass (or stars) at the helm, take weather observations, and keep an eye out for ships or other traffic. Ongoing maintantance tasks provides amazing training opportunities to learn traditional marlinspike skills, such as sail repair, stropping blocks and then going aloft to install them in the rig, and unbending/bending on sails while the ship is actively sailing.

We help with scraping, sanding, and varnishing (which always proves to be remarkably satisfying). The voyage crew jumps in wherever we can, eager to learn and help keep the ship running. Every day brings new and exciting tasks to try for the first time or continue practicing and work toward mastery

The down time we have we spend laughing and telling stories over meals and coffee, watching the jellyfish glow in our bow wake after dark, identifying constellations in the brilliant Milky Way shining above us on clear nights, singing songs and playing the ship's guitar or ukulele, or just taking a little time to admire the sun sinking below the horizon or how the wind plays along the surface of the water. So for the folks back home: there is no being bored on board a tall ship. In fact, because we've been so busy the last dozen days, time feels like it's flying. Though 52 days at sea may sound like a long time, it won't feel like it.