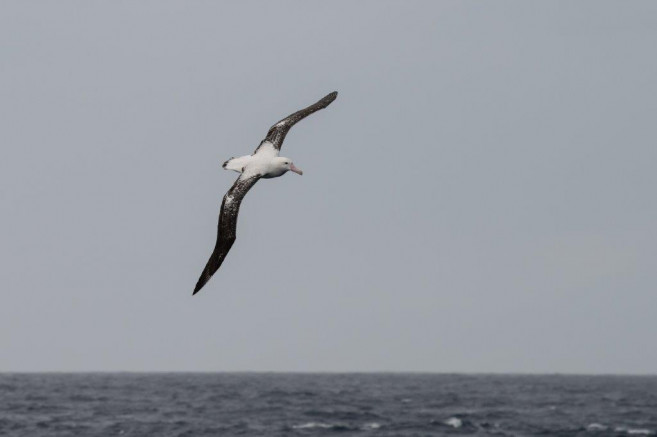 With the first daylight over the grey skies of the early morning, small flocks of Spectacled petrels became visible gliding around the ship. Some of their neighbors in the Tristan archipelago, their breeding grounds, also join now and then at the distance, the Great shearwaters and Atlantic petrels.

Among them a much larger and elegant bird stands out. Today, less than 500nm from Montevideo on the offshore waters along the coast of Brazil, two wanderers of the seas met: The Bark Europa, sailing since 1994 under her three masts and almost 30 sails, and a Wandering albatross, magnificent, master of the dynamic soaring over the Ocean with long sweeping glides on its stiff outstretched wings, which can reach 3.5 metres from tip to tip. One of the most spectacular sights from these latitudes to the cold Antarctic waters.

Nowadays is well known their biology and nesting biannual habits at twelve island groups around the Southern Ocean. Even four of those populations have been classified as sub-species. But despite being a spectacular sight and the largest flying bird, not rare if sailing southbound to the Subantarctic area, we must remember that it was not until passed mid 18 century when ships ventured these waters and specimens could be collected.

Linnaeus, who put together an orderly classification system for animals and plants which we still use nowadays, in 1758 described the Wandering albatross cataloging it in the genus name Diomedea. His inaccurate description (probably just based on a couple of drawings from the time) had to wait ten years to be completed.

During Captain’s Cook’s circumnavigation in the Endeavour (1768-71), the Naturalists on board, Joseph Banks and Daniel Solander, could get a specimen for the first time, on the 23rd December 1768, when they were in the SW Atlantic off the Rio de la Plata. On this first description of the species based on an actual animal, stands out the large wingspan reported. Banks wrote in his journal “… killed an albatross Diomedea exulans who measured 9ft 1 inch between the tips of his wings.” Wings that are put in good use for their flights over the sea, ranging from few hundreds of kilometres from their colonies to amazing distances of even 25.000 and 50.000 kilometres when not breeding. For that, they need strong winds, one of the reasons why they mostly use the windy belts of the southern ocean, the Roaring Forties, Furious Fifties and the Shrieking Sixties.

Sure we will meet again during the next months, when the Europa will be sailing on those same latitudes,  visited regularly every year by the Europa on her Antarctic and Southern Ocean schedule.
But for the moment, the aim of the actual trip is to make it soon to Uruguay and with it, completing the crossing of the Atlantic. Getting closer now, with 4221nm already at our backs. But, as it couldn’t be in any other way, a weather change is forecasted for the last few days left of the journey. The easy sailing which we are used to, seems that is about to become more hectic, with a forecasted passing Frontal Passage with increasing winds and shifts from ENE-ly  to Southerly.

Already this evening lower temperatures, blows up to 25kn of wind and drizzle weather made for dousing and furling the Skysails and Upper Staysail on the Main Mast, not much later followed by the Royals and Flying Jib.
The variable weather during the whole day, with cloudy skies and sunny spells now and then, offered a good scenario for a beautiful sunset, including the always rare sight of the Green Flash when the sun sunk in the oceans horizon in a clear atmosphere.

The upper part of the sun’s disc, which is the last to disappear, turned emerald-green. The phenomena usually lasts only a fraction of a second, which is the reason for calling it the “the green flash”. It is produced by the last rays of sunlight originated from the upper limb of the sun, being refracted before reaching the observer’s eye. The shorter waves which appear as violet, blue and green light suffer greater refraction than the orange and red longer waves of the white sunlight. The fineries of the upper limb of the Sun cannot usually be seen while the main body of the Sun is still above the horizon, as the general sunlight is too strong, but when most of this is cut off by the light of still shorter wavelengths usually being scattered by its horizontal passage through the lower atmosphere.