The grey and cloudy skies early in the morning were forecasting a rainy day, and indeed, around breakfast time the rain started, and was going to be with us for the whole day. Typical weather for this part of the world. 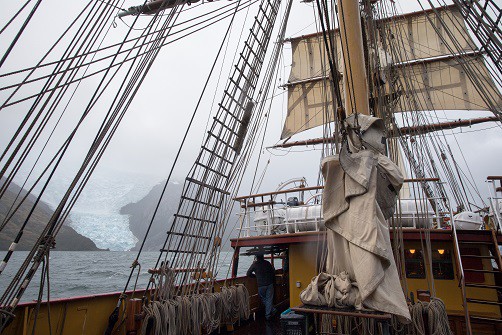 Pretty early we started with sailhandling for the first time during our trip, and we were busy the whole day as we sailed under variable winds through different passes and channels of this amazing maze of islands and rocks that is Southern Patagonia.

Before breakfast, we start having some wind, between 12 to 15 knots following the shape of the channels where we sail, the Canal Magdalena. This channel was named by Pedro Sarmineto de Gamboa in 1580 and its surrounded by the Patagonian Southern Beech forests. In fact these areas between Straits of Magellan, Beagle Channel and Cape Horn hold the southernmost forests on earth. Soon we start bracing around to Port Tack, unfurling and setting Upper and Lower Topsails. Some of us were already around and could participate, helping the crew pulling ropes and hoisting sails. Now, at the beginning it all looks complicated and its difficult to get the system for braces, buntlines, clews, sheets and the hundreds of ropes all around us. But as the trip progress, having quite long sailing stretches and with the help of the crew and their informative talks, we hope to learn quick and soon be able to set sails ourselves under the Captains and Mate’s commands and supervised by the Europa professional sailors.

A bit later, at 08:15h we brace squarer and set more canvas, now some Staysails. Aap, Dekzwabber, Fore Top Mast Staysail and Spanker are set, as the wind veers to NE-ly, blowing 12 knots and we motorsail at 6 kn. After breakfast we all meet in the Deckhouse for a short presentation given by the guides Sarah and Jordi, about life on board and an introduction to our voyage. Afterwards we were split in the watches that we are going to keep for the trip: Red, White and Blue, and we went through the whole ship while crew members were properly introducing the Europa and the duties we are supposed to conduct on board. Around midday the square sails that were set started backing under NW-ly winds, and we take them away, and change the staysails to Starboard tack, but just for a while and afterwards, before lunch time we take them away as well. By then we were sailing westwards through the entrance of the Cockburn Channel. Captain Phillip Parker King named this wide and deep channel in 1825, after George Cockburn a British admiral famous for having escorted Napoleon Bonaparte to his exile in St Helena. During the afternoon we sail through its 40 nm in length, while we get some line handling instructions and hand on sailhandling with the crew, on deck under light rain.

Later on, as we were approaching the open waters of the pacific Ocean on our way between the Magellanic area and the Beagle Channel, we start feeling the swell, and to avoid the rough weather of the open passage that the commercial route follows, the Pilots on board agreed to choose a nicer, narrower and more protected route. Like this we come into Paso Aguirre and Canal Occasion, a secondary channel running between the E side of Isla Aguirre and Peninsula Brecknock. Its narrow, runs between hills where several waterfalls could be seen, and has several shoals androcks on the way, mostly marked by beacons or large kelp patches. Then after zigzagging this interesting route, Canal Occasion makes a wide turn WSW and joins Canal Brecknock. While sailing in this area the wind picks up to 16-18 knots from the SW, a nice opportunity to set again the Lower Staysails plus the Inner Jib and the Spanker. Topsails are hoisted as well, and we brace the yards sharp to Starboard Tack. Like this we can reduce the RPM on the engines and still keep motorsailing at a speed of around 5 to 6 knots. Anyway, as the wind become variable again and drops, we take the Top Sails down later in the afternoon. And again, under more favourable wind conditions we set again Topsails and we also add the Middle Staysails at 21:30.

Overnight we continue on our way towards the Beagle Channel through Bahía Desolada and Canal Ballenero keeping the appropriate speed to time our arrival for tomorrow morning to Seno Garibaldi, one of the most beautiful fjords in the Beagle Channel. The British Captain James Cook named Bahía Desolada in 1774, obviously impressed by the desolate appearance of the area. Captain Fitz Roy named Canal Ballenero in 1830, in commemoration of the theft by local natives, of one of the whaling launches from his ship, the “Beagle”, while surveying the area. As the light dims some of us have a look outside on the rainy deck, where we could see several Giant petrels and Black browed albatrosses resting on the water of gliding on the light winds that we are having in this channels. Also some South American Fur seals are around purposing on the calm waters.