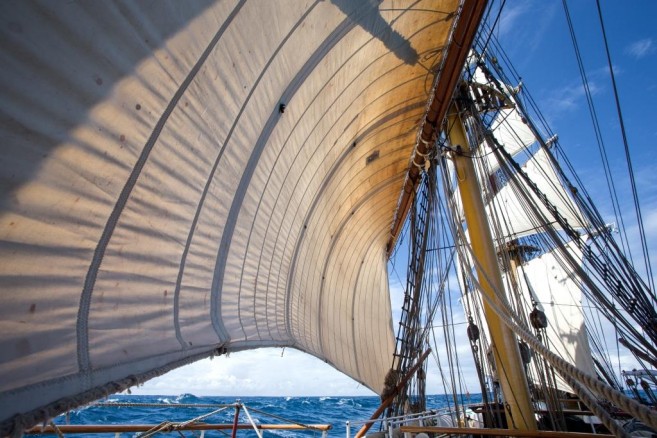 Last night, just after midnight we wear ship. With the Westerly winds we were sailing on a course getting us closer and closer to the Chilean coast.

After the manoeuvre we head Southwards for 20 miles, until the early morning. At around half past six we wear ship again, getting to sail on a NW-ly course. But we get a couple of squalls as well, and we were all ready to take sails away. In fact the Storm jib that is rigged as a Flying jib, together with the Outer jib and the Vlieger are taken down and furled, to be set again after the showers. Library has become a sail repairing space and the damaged Flying jib had been re-stitched, now ready to come back on duty at the end of the bow sprit. Taking advantage of the good and sunny weather between the showers we get it ready to be bend on. Fore course is still under under repairs. This morning’s squalls brought snow, not so much amount of wind but several degrees change on its direction. We still sail on an area that shows lots of wind instability, and being the steering quite difficult, is done by the permanent crew.

This situation changed in the afternoon when the SW-ly winds increase, now having winds up to 20 to 25 knots between the several squalls passing by, increasing over 30 knots, with the skies darkening and snowfall when we are hit by them. The instability continues, making us busy setting and taking canvas away, or being on constant standby ready to do it. The SW wind keeps veering and backing between 210º and 240º, and all we hope that is not becoming more West, as we sail pretty close to the Chilean rugged coast, and we cannot be pushed towards it more than we are actually now. But luckily the wind direction stays until the end of the day, just dying down late at night for a while, and increasing again afterwards, shifting between 15 to 23 knots. At least we can have some nice sailing, making our way NW along the Pacific coast towards the Straits of Magellan, getting off the grip of Cape Horn. As the clouds on the horizon lift or leave a gap between them the coast can be seen. All this area of the Chilean fjords we have on our starboard side is mountainous, with multitude of islands, islets and rocks extensively littered with rocks and shallows.

On other circumstances the sight of land could be a cheerful event after a long ocean voyage, but here just means getting closer to a hazardous area to avoid, until reaching lower latitudes, where the entrances to these channels, fjords and straits are safer for navigation. Just think on the old times when the sailing ships, without the possibility of having any engine power backup, radar or modern equipment, tried to escape the grasp of those waters, but not accomplishing it, got too close to land. In that cases, their fate on the southern Patagonian waters lead just to an extremely difficult and burdensome navigation through uncharted traitorous and shallow waters during countless days, or shipwreck, as we can see on the charts showing all the ships that went down in Cape Horn area.

The sailing, sea and weather conditions we are experiencing during last days make us think about all the people and ships that actually accomplished the Cape Horn crossing, but also on the many that never made it and still remain here. Those conditions got grip of us as soon as we passed by Cape Horn itself, and its not been until recently when we are slowly getting in the Pacific sailing on a more or less good course towards the Northwest. But by now, besides being at the edge of the distance we have to keep to the coast, we had to battle and struggle for long time against the winds, seas, currents and squalls. Meaning; we try to sail as far North as possible, but also to be on time in Punta Arenas. Our new aim is the Western entrance of the Straits of Magellan, instead of sailing all the way up to 50º S.

The birdlife around the ship became again more abundant, and several Black browed (the most abundant in the area), the beautiful Grey headed and Wandering and Royal albatrosses enjoy the windy conditions gliding elegantly close to the ship amongst the big swells, accompanied by numerous Giant, White chinned and Cape petrels.