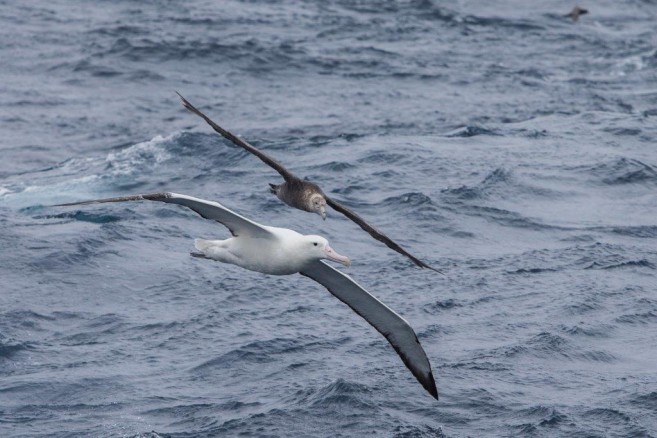 For the few dark hours last night and early morning, Europa enjoys an exhilarating sailing southbound, leaving behind the last islands of the Cape Horn archipelago. Reaching the seemingly boundless ocean, the swell started increasing together with the WNW-ly wind. Blowing over 30kn some of the square sails are clewed up. Starting from the Royals and later on the Main Top Gallant, but still keeping good speeds of 7 to 8kn on a good 200º course.

Rolling ship and first waves washing the deck made us start realizing what lays ahead, in a sailing trip that besides bringing us to the Antarctic and Sub-Antarctic shores, involves an ocean crossing at high latitudes along all those renown and infamous seas of southern Patagonia, Cape Horn, Drake Passage and the Scotia Sea. Waters full of history and sailing adventures, from the first natives inhabiting them already about 7000 years ago, to the modern discovery of the European world, since the year 1520, when Magellan reached the southernmost tip of the South American continent. From there he entered a wide channel, which he navigated all the way realizing that it represented a connection between the Atlantic and Pacific Oceans. Straits of Magellan have been discovered. This route was followed in 1578 by Sir Francis Drake on board the Golden Hind, but upon his arrival to the Pacific Ocean, his ship was pushed southwards by strong N-ly winds. Reaching the latitude of 57º S on previously unexplored waters, he didn’t find any land extending from southern Patagonia southwards as had been speculated on his times, but a vast open sea instead, later named the Drake Passage. It was not until thirty years later that the Dutch sailors Willem Schouten and Jacob Le Maire confirmed that Tierra del Fuego was an island when they discovered and rounded the Cape Horn, coveted sailing undertaking till this very day by intrepid sailors.

Despite the winds brought us to just 20nm from this mythical cape during the early hours of the day, we couldn’t get a glimpse of it due to the low clouds and hazy weather.

Actually the weather probed to be the most important news of the day. Again, thanks to Captain FitzRoy, who discovered and charted the Beagle Channel, nowadays the starting point of almost all Antarctic trips from South America, with a large fleet based on the port of Ushuaia, we have the invaluable chance of studying the weather forecasts. He was actually the inventor of this specialty, developing his interest on meteorology along his countless sea voyages under sail in the 19th Century, and also commanding the first screw-driven ship commissioned by the Royal Navy. He became interested on weather forecasting to save lives. He knew from his own experience sailing the world’s oceans the value of advance warnings of storms at sea and developed great interest on doing whatever he could to help mariners. All this brought his research to design the firsts weather stations with barometers and thermometers, initiating a system of storm warnings and he also issued the first daily weather forecasts, firstly published in “The Times” newspaper. From these early times, nowadays the systems have been evolving and computer simulations give us accurate information about the weather systems all over the world. On board we have the possibility of daily downloading the wind forecast, of utmost importance for safe sailing by keeping track of High and Low-Pressure systems, governing the winds, allowing thus for an appropriate routing to reach our destination. On this way, during the morning our Captain got the fresh forecast. After a thorough inspection it gets clear that with our current course and speed, Europa is heading straight to the northern side of a strong Low-Pressure system. The screen shows W-ly winds over Force 10, gusting above 50kn ahead of us, as we get deeper into the treacherous waters of the Drake Passage. A short consideration of the situation leads to the wise decision of wearing ship, turning around and seeking for calmer conditions north or northeast of us. Being close to the islands of Southern Patagonia and Tierra del Fuego that would provide shelter from the strong West winds, we all agree on the choice of not steering deliberately straight into storm Force winds, seeking for refuge for a few hours instead. Seems that the storm is passing fast and, in a day, or so would be able to face the Drake Passage again.

After a meeting in the deckhouse to inform everybody about this situation, hands are needed on deck to wear ship to port tack and head northeastwards. For an easier operation all square sails set are clued up but the Lower Top sails, Deckzbabber also comes down, while the Captain takes the wheel in already increasing winds. With both permanent crew watches on deck plus many of the voyage crew, soon the operation is swiftly accomplished, and we found ourselves heading on a NE-ly course, putting some miles between us and the cold blast of a full Southern Ocean storm, south of our position. Courses are furled and from then on, we enjoy better sea conditions and gradually decreasing winds, at the point when we seem to just sit on calm waters and windless situation in the afternoon, when we set the Courses again and staysail Desmond replaces Aap, to help avoiding a bit the leeway caused by the WNW winds and the Westy to East flowing strong current.

During the day, sea conditions allowed us to start the lecture program on board. On a trip like this we will try to integrate different fields on it, from the Natural Sciences, the sailing itself, and of course maintain the sense of a great adventure. In the morning, as many seabirds fly around the ship, already since the start of the trip, Jordi introduced us to the biology and different species of birds of the Southern Ocean and Antarctica, followed by a photo and identification session on deck. Northern and Southern Giant petrels are all over, a few Black browed albatrosses seem to follow the ship, all dwarfed by the immense Wandering and Royal albatrosses, that today show themselves in great numbers, soaring over the swell and enjoying the morning winds, before it becomes calm in the afternoon and they prefer to sit and wait for windier conditions, that allows them to save energy with their gliding flight instead of flapping their enormous wings, that stretch the whole wingspan of those species to about 3.5 m.

In the afternoon, and under much calmer conditions, Mateo talks about the whales and dolphins we might be able to see during this trip, elaborating on their life strategies, evolution and biological facts. Like this we end a day full of unexpected turns and interesting wildlife around us, all hoping for a quick improvement on the conditions south of us to turn around and head again towards Antarctica.

Hi Kal, it´s the duch nickname for one of the staysails.... If I remember correct; the Main topmast staysail.

What you have mentioned re changing directions to avoid the heavy winds and continue.What is a deckzbabber ? I never heard that word before.Thank you ,Kal H....