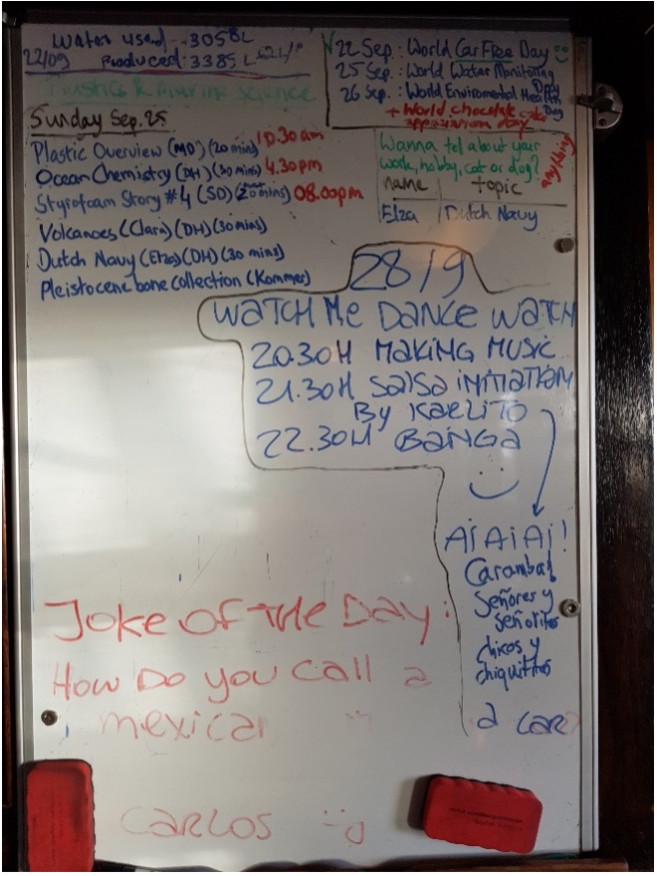 The end is near. Time for a wrap up. It’s been just unreal. Dolphins, turtles, whales, sharks, bioluminescence, clear starry nights, deep blue oceans, different types of weather, plankton, plastics, a stop at Madeira and most of all, a very nice group of people.

Making speed we found ourselves some time to stop at Madeira, the flower island and birth place of Cristiano Ronaldo. Some of us visited his statue, that was fainted in some areas. Voyage crew Willem noted: ‘’You can see where people like to touch him the most.’’ Voyage crew had a day off. Many of them explored the island a bit. Permanent crew took turns on the watches. I strolled around the marina area, found myself joining two different weddings in two different churches that seemed to be open to the public and spoke to the fishermen in the fishing harbor.

Back on board Ellen and Zoë shared their versions of the life story of the Styrofoam box, that we found in the Atlantic earlier and whose life had already been by other voyage crew in the days before. The creativity and passion with which their stories were told was amazing. All present crew hung on their lips, while in the background the sun called it another day.

Every morning the sailing crew, Marcus and myself discuss the daily program. We write all events on the whiteboard in the deckhouse, and also the global environmental days that are celebrated during our voyage. We celebrated World Car Free Day on September 23 on the Atlantic Ocean. Voyage crew got creative and added a ‘joke of the day’-section. On one day, someone answered with ‘my life’ – I’m guessing that was great Scottish humor. Also, someone made a hilarious and spot-on drawing of the difference between ‘land in sight’ in 1725 and 2022. Thinking about modern communication tools you can probably guess what it looked like.

Marcus repeated his plankton identification talk and gave a lecture in the deckhouse about ocean chemistry. He also did another plankton trawl. I repeated my plastic overview presentation and gave it to the permanent crew as well. It was nice to involve them in ‘our program’ as they involve Marcus and myself with the sailing and maintenance as well. I also invited the different watch groups of the voyage crew to split their groups in government, industry and consumers (and, if they wanted, media/influencers and NGOs) and come up with ideas to increase our plastic footprint and general ecological footprint. On the last day the different groups will present the results of their brainstorming sessions.

Seba and Mkize continued their ‘Dungeon Tours’, taking voyage crew belowdecks. In groups of four the energetic engineers showed them a whole new world on the incredibly efficiently organized ship. After another eight o’clocky (daily update), Elza gave a presentation about her work as doctor on board Dutch navy ships, wearing her navy hat. Camille presented her plan for a dance night on deck on the last night. ‘’I can’t dance but it’s fun.’’ Voyage crew will no longer be on watch then but they will all ‘Watch me dance’, Camille thought out loud. The program so far consists of a salsa initiation and a lot of twerking (whatever that may be 😉).

Yesterday morning I woke up at 4am and couldn’t sleep anymore. After listening to music for 1,5 hours I got out of my bunk. On the main deck I found voyage crew Ellen using an app to discover star constellations. The sky was clear and dotted with stars. The rocking ship gave the impression of one of those half circle glass bowls that we would shake as a kid to create snow. Incredible. I walked to the foredeck to look for bioluminescence in the water – the plankton that light up in the bow wave. It was still dark. After a couple of minutes I thought I heard a splash, different than those from the ship splicing and bouncing through the water. Then I saw the slightly illuminated silhouette of a dolphin swimming next to the bow. Soon I saw several more and I called the voyage crew on fore- and maindeck and deckhouse. What an incredible sight. The dolphins – not sure what type, they seemed quite big – gave a beautiful show of light and breaching. Looking up, to the stars, and back down, to the scene in the water, I figured it doesn’t get any better than this. This is ocean sailing. In the meantime daylight was slowly but determinedly chasing the stars away, knowing it would be prevailing again for another twelve hours or so. What an experience. Time to setup the GoPro’s (for The Ocean Cleanup research project) and time for another delicious breakfast produced by the never failing, always delivering cooks Gjalt and Sara. What a morning.

The eight o’clock crew handover – this is the morning eight o’clocky - was set against a backdrop of a rising sun over a Canary island. In the afternoon we anchored just south of Fuerteventura for a refreshing swim. The clear light blue water welcomed us with a smile and some wave action. Afterwards I climbed in the main mast up towards the Royal sail, the second to highest, to enjoy a magnificent view of the Atlantic Ocean in all sorts of blue, trying to take back the arid island. After the evening eight o’clocky voyage crew Kommer gave a presentation about Pleistocene bone collection. With a good sense of humor the former fisherman gave an insight in his impressive collection of thousands of bones – from wild cats to wooly mammoths. One of the last sessions on board. Tomorrow will be the last day of sailing on this voyage. Let the melancholy come already, it’s been quite unreal. (but not before we’ve had our closing party)

‘’The sea, once it casts its spell on you, will hold you in its net of wonders forever.’’

Paul Theroux of the ocean 😉