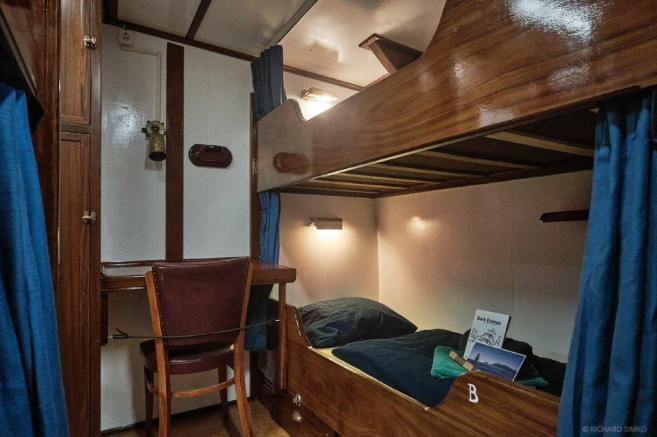 A few afternoons ago, our beloved Bosun Krista, gifted Gjalt and I with a door key. A beautiful bright green paper key with the words ‘Casa Blanca’ emblazoned upon it.

Over the past 8 weeks the crew have been hard at work on various maintenance projects all over the ship, including the extensive redecoration and restoration of some of the cabins. Cabin 7 was the first to be completed with the bold new look, revitalised as Casa Blanca, and we had been given the key!

Our current home of Cabin 5, is a very small cabin, especially for a fairly tall woman and a 6ft something Dutchman. At the start of this voyage I suffered with quite some seasickness and claustrophobia, causing a few night time panic attacks. As I have the top bunk, the ceiling can feel like it is just centimetres from your nose and in rough weather the walls often feel like they are closing in.

However there are some perks to Cabin 5. The air conditioning gives ice cool air and within minutes the cabin is a haven to retreat to in the tropical heat. The porthole lets the sunrise dance in and there is a small but very handy bathroom - you can have a shit, shower and a shave all at once if you like!

Cabin 5 means a lot to Gjalt and I. It has been our home on many trips together and was the cabin Elsa caught me sneaking out of one night (when we were still trying to hide our relationship) and finally busted us!

After the last 70+ consecutive days living in there together, we were rather aprehensive about a big move. We had gotten ourselves into a daily rhythm. Gjalt waking me up (sometimes with a rasher of bacon!), making the long walk to work and the daily evening decision of who will have a shower first whilst the other drinks more wine.

Nevertheless, open to change, we agreed to do a trial night at Casa Blanca - a kind of try before you buy.

Well, we opened the door of our potential new home and were instantly wowed. A once dark and fairly dated cabin was now bright and gleaming. The deep rich wood shone with new varnish and the brassware and lighting looked smart and polished. So much attention had been given to every detail, like the ceiling trim and the stunning hand-painted bunk letters. The navy bedding completed the nautical but cosy feel. There was even a desk! The bathroom was much bigger and had lovely natural light and a mirror positioned where we could actually see our faces in it.

There were 4 bunks to choose from. I usually like to be on top (don’t.), so I wanted to try life in a lower bunk. I would no longer need to feel as though I would fall out of bed on the wrong tack or have to clamber in and out of it with about as much grace as a voyage crew trying to pour milk onto their cereal whilst holding a coffee and a camera. Gjalt and I could even wave at each other from our new beds!

After just one night at Casa Blanca we were sold. We put Cabin 5 on the market which to our delight was instantly snapped up by another couple. Although we were content in Cabin 5, our Casa Blanca palace makes us so much happier and even affords us some luxuries – like a drawer EACH! - for the last few weeks of the voyage.

Thank you to all the crew (especially Krista) for your efforts in finishing this amazing space, with such impeccable workmanship, and for allowing us to be its first lucky occupants.

Transported me from my corona bubble to yours for a few minutes. I will visit you in my head, and update myself on the blog when my bubble gets too claustrophobic. Ironic really since I’m sure my bubble is bigger, but oh your endless views!

What a surprise to see cabin 7 so bright. Gjalt and Emma enjoy your "second home". Krista and team, well done!