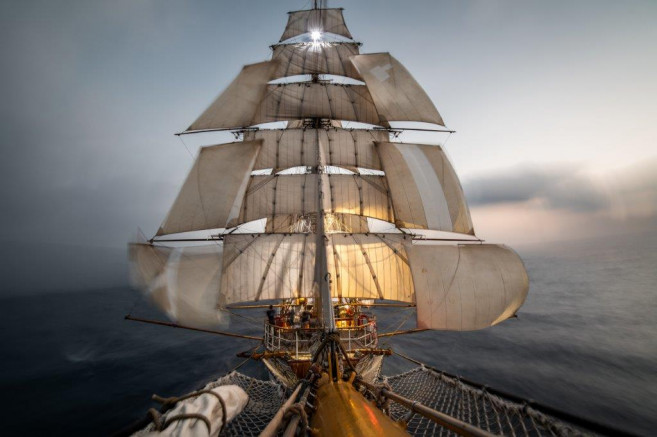 Fascinating glittering of the little creatures inhabiting the ocean as Europa’s bow cuts through the low long swell welcomes us on deck during the night watches. With easing winds pulling us ahead, the speed decreases allowing to continue with Fran’s project on bioluminescent plankton. Soon all is ready and the trawling net skims the surface waters on our Starboard side. The rich waters surrounding us offer another great chance for a good catch, and indeed after half an hour trawling, myriad of little creatures fill the water sample collected.

The larger Manta trawl used by Regitze’s project can be seen later in the afternoon getting ready on deck and being deployed as well, in the hope for a good session of three trawls to check the presence and types of micro plastics in the ocean. On that occasion, the variable winds play little tricks with this data collection as the gradually rising speed made for an increase difficulty on the methodology.

The wind variability has been a constant for the day, starting with NE-ly breeze that made for just keeping Studdingsails at Port side, but then, before dawn, Northerly winds easing in strength made for the decks to be busy with all hands on watch to pull halyards and sheets. Before sunrise the last of the six Fore-Studdingsails is set.

With the deck flood-lights turned on for sailhandling during the dark hours, a couple of unexpected visitors could be found on board. Some seabirds are attracted by the shinning lights in the midst of the night-time dark ocean, and can end up landing on board and becoming disoriented. Best way to act is to offer them a few hours of tranquillity on a quiet place and release them at dawn. They seem to be Leach’s storm petrels. A widespread species which presents various forms in all three oceans, but generally having a brownish-black head, with darker upper parts except for white rump that extends to the forked under tail. Small as they are and fragile as they look, the storm petrels are tough little sea birds that spend most of their lives at sea coming to land for breeding and conducting large latitudinal migratory patterns.

They are not the only explorers newly found on board. Here and there little locust-like insects can be seen jumping around. Less than 4mm in size and of a light brown colour, sure they have been blown away for about 250 Nautical Miles over the ocean from the nearest African desert shores before finding the impressive sight of the Europa speeding all her square canvas to the NE-ly winds. A pretty good platform where to land and have a rest, not being aware of our itinerary that will bring us gradually further away from any land across the Atlantic Ocean.