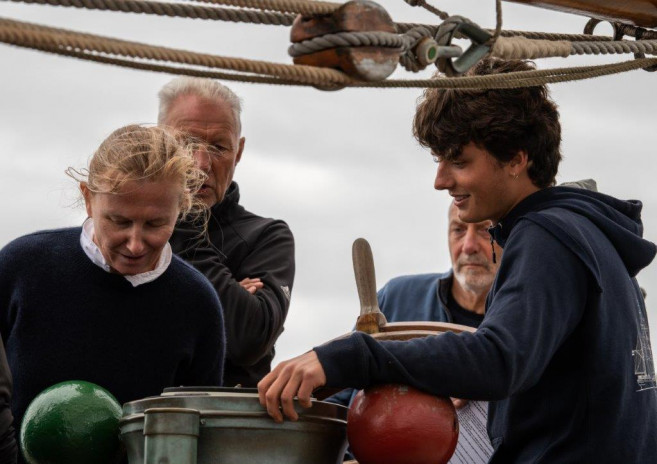 An overcast morning gave way to blue skies, while the calm winds of last night and early morning had become a good breeze that increased to about 20kn during the afternoon, allowing for a great day of sailing. As the wind was picking up, Skysails were clewed up and furled, keeping all the other canvas set for the rest of the day.
Braced all along on close hauled Starboard tack we followed a Northerly course, practicing steering by the magnetic compass.

Even though the Europa is equipped with a modern digital tablet used by the ones at the wheel to check course and wind direction/speed, we are back to the reliable magnetic compass for steering. Now and then malfunctioning, the new electronic technology can’t compete on simplicity with the good old instruments. When working properly, this new GPS technologies help us learning and steering on a straighter line. While the iPad determine true North, as opposed to magnetic North, and it is unaffected by perturbations of the Earth's magnetic field.

Early travellers and mariners navigated by the sights of land and positions of sun and stars. But during the 12th Century the first compasses were created, and it is thought that they were first used by Chinese sailors. The principles of the instrument we use nowadays are the same used by those early navigators, basically a floating magnetised needle in a bowl of water. It was not until late 17th century and even about 100 years later, when astronomical discoveries linked with creation of charts allowed for the designation of lines of longitude and maps became a tool for the golden age of navigation to leap forward.

While the people on watch at the wheel tried to keep a steady course on that fashion and a sharp lookout at the fore deck, the ones that were up to it could join the permanent crew aloft to receive the first rig climbing instructions. A good beak for them from the never ending and continuously ongoing maintenance that a ship like the Europa requires.
The rest of the day proved to be a useful time to get accustomed to the watch system, improve our steering skills and now and then enjoy the view of seagulls and gannets that pay us a visit on their wanderings over the North Sea.