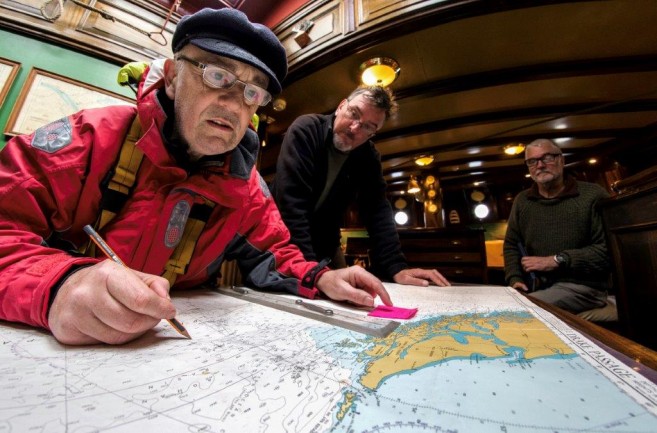 In the early hours of the day we find ourselves motoring our way south, on light N-ly winds and still quite an important swell, making the Europa roll on an uncomfortable movement during the night. The strong winds had subsided to barely a light breeze of less than 10kn blowing on our back. All square sails are clued up, and Spanker, Gaff Topsail, Lower Staysails, Mizen top staysail and Outer jib are also brought down and furled. Starboard engine roars again, and we are all waiting for the winds to increase. And indeed, it didn’t take long and gradually more canvas is set during the dark hours. N-ly winds increase allowing us to set the square sails up to the Top Gallants, bracing slightly to Starboard tack. Spanker is also up, but the smaller try-sail is also ready in case if strong wind blasts. That would allow easier steering with the increasing tail winds. From then on, then the engine is turned off again and we sail at 5 to 6 kn keeping a southerly course.

The morning finds the ship sailing under the same configuration, with just a couple of small adjustments, including clueing up the Main sail plus furling the Mizzen Top Staysail. All under cloudy skies and rainy weather, after having enjoyed yesterday’s sun.

The pouring rain keeps us wet during all morning, while we roll, sailing close to Broad Reach under 30kn of variable N-ly winds, that keep veering and backing between NNE and NNW-ly direction. A fact that made us pay lots of attention to the steering and continuous changes on course. Those changeable conditions are related with another Low-Pressure system passing by. Forecasted are strong blows but significantly weaker than the depression that made us seek for shelter a couple of days ago. As this new weather system is travelling along the Drake, with its center passing almost over our heads, its associated winds are not stable, and we experience several changes in a few hours. Conditions that sure still guarantee for a rolling journey, where care must be taken to move around the ship. For some, seasickness make our only horizon to be reduced to the view of the ceiling above our bunk, the bottom of a bucket or the toilette bowl.

Anyway, mealtimes gradually are becoming more popular and now we can see practically all of us walking around with plates and soups, keeping our stomachs busy.

For the ones who venture out on deck, is not just to steer and lookout that hands are needed for, but to give a hand with the lots of sailhandling necessary to keep us on track under such variable conditions we are having on the Drake.

Under this situation, before lunch we Jybe the ship to Starboard tack, and during the afternoon more canvas is set. Royals join the rest of square sails and with backing winds, now becoming W-ly blowing between 18 to 20kn, braces are set on Close hauled point of sail.

The rolling conditions improve during the late afternoon and evening as we pick up speeds around 7kn on a good S-ly course. Good sailing conditions prevail until late at night when again wind backs becoming SW-ly, rising in force and gusting over 40kn. Time to strike sails and work aloft furling Royals and Top gallants, while Outer Jib comes down as well. The Drake Passage shows again its fierce reputation as we get closer to the 60ºS and the Antarctic shores.

Some can be found eagerly plotting our position on the chart displayed at the library, getting excited seeing that now is just 250nm to reach South Shetland Islands, after sailing 135nm during the last 24h.

Although officially the Antarctic area starts south of the 60ºS by convention, the white continent likes to play under its own rules and offers a more elaborated definition based on oceanographic and biological features. Actually, as approaching Antarctica not just the air temperature drops but also the surface water gets colder. Subantarctic temperate waters meet the Antarctic water mass, creating a front of steep change on temperature, the so called Polar Front or Antarctic Convergence Area. Keeping track of the water temperature we can see that during the day it has dropped considerably, indicating our entrance to the Antarctic system.

This important oceanographic feature was discovered on 1911 during the German Expedition leaded by Filchner, on board the ship “Deutschland”. They departed to the virtually unknown Weddell Sea with great dreams of trying to reach the South Pole, together with a well prepared scientific program to develop. They managed to get to land beyond the icy water of the Weddell Sea, reaching further south in the area than anybody before and conducted important observations on climate, geography, geology and oceanography. But not all went well during this expedition, many ambitious exploratory plans had to be abandoned mostly due to Captain’s clashes with the leader Filchner and the scientific team. On top of all they were forced to an un-planned overwintering, that helped lowering the hopes and morale of the crew, all an all ending up close to mutiny. Partly because of that, back in Germany

the expedition was never credited for their outstanding discoveries and exploratory results. Amongst their many findings, while sailing south in the high latitudes the oceanographer on board Brennecke realised a sudden drop in the salinity of surface waters flowing north, and an associated steep temperature plunge. He just had discovered the Antarctic Convergence, a consistent boundary to define the start of the Antarctic region.

And as we get into Antarctic waters and closer to the continent, wildlife changes around the ship can be noted. Increasing numbers of the beautiful Cape petrels join us, while the small Wilson Storm petrels, delicate as they look but tough as they are, flutter un-tiredly over the high seas and strong winds of the open waters of the Drake Passage, unbelievably far away from any land. Numerous White Chinned petrels soar around us as well. Soft plumaged petrels, a species of bird that we haven’t seen yet during the trip also pay us a visit. Its looks are not very spectacular, being a medium sized petrel, of robust appearance, brown-grey above, dark underwings but with a lighter belly, grey breast band and a dark eye patch. Nevertheless it is actually a non very common bird to spot, as their breeding sites are restricted to remote islands of the South Atlantic and South Indian Oceans, spreading on their flights all over the southern part of those vast oceans. Is not often that follow ships and when they do they tend to keep a bit of distance from them, as they did today with the Europa.

The weather and seas were good enough to allow our guides to continue with their informative talks, and today was the time to be introduced to the Penguin world and the particularities of the Antarctic climate.

Despite having nowadays a total of 17 species of penguins, the fossil record counts so far with 40 of them, being this group of seabirds practically centered on the Southern Hemisphere and more diverse in the past. They are the most adapted birds to the marine environment, even loosing the capability of flying in favor of an aquatic life, developing their body and biology accordingly. Three of the so-called brush-tail species dominate the bird biomass in Antarctica during summer (Gentoo, Chinstrap and Adelie), together with the elegant Emperors as the winter penguin in Antarctica. A couple more species can be found in South Georgia, there the everpresent Kings dominate the open plains and wide coastal valleys, while the Macaroni occupy the swell and wind battered coasts of the island.

They all live on the unique Antarctic continent and associated remote islands. Nowadays isolated and icy, fossil record of plants and animals reveal that was not always like this and it was connected with the South American continent, during warmer periods of the Earth's climate millions of years ago. After Antarctica was separated from the rest of continents, the Circumpolar Current developed running clockwise around Antarctica, isolating the continent climatologically from the rest of the world. Since the continent is positioned over the pole, temperatures drop and snow accumulated blanketing the landmass. So much water is accumulated as ice in Antarctica, that if all of it would melt, global sea level would rise by 50-60 meters. With a warming world due to the emission of greenhouse gases, there is great concern about the development of the thickness of the icecap and the extent of the sea ice surrounding the continent. Another concern related with human activity and atmospheric emissions is the depletion of the protective Ozone layer due to the artificial chemical compounds known as CFCs. Humans had become one of the drivers of the Earths' climate, and even the geological era we live nowadays is called accordingly: the Anthropocene.

Wow, that is a lot of very interesting information and also a good narrative of the day to day variables when you are all running by sail .