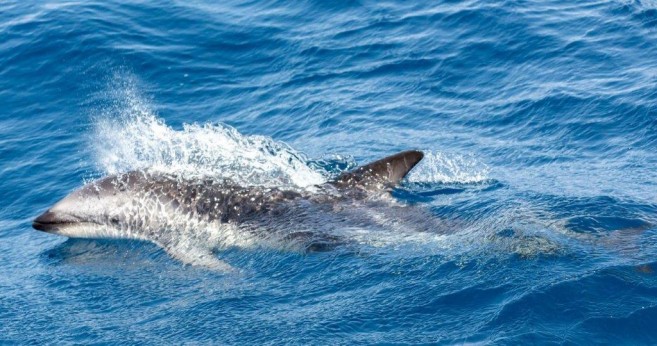 The day continued with the variable and changeable wind conditions we are getting used to and after a good sailing day, right after midnight the wind died down. We clewed up all our square sails, struck all staysails and started our engines to keep the speed at about 5kn, gently rolling in the long swell. The lack of wind and sailhandling made for quiet watches in the early morning until some excitement was given at dawn by the sight of a large iceberg. Shaped by the melting as it drifts on 11º C waters it has surely been travelling already a long distance from its origin, probably on the Weddell sea area, to reach its actual position at a latitude of about 45º S.

The windless hours ended with the first blows of a fair breeze. A good 16 to 17kn westerly signalled the time for setting almost all the canvas once more. Just the gaff topsail, main course, dekzwabber, fore topmast staysail and inner jib remain on their gear or furled. Stopping the engines before 05:00h we reach again our cruising speed of 5 to 6kn on a 140º course. By now we are all getting used to the routine of the life on board, our watch system and to the fact of arranging yards and canvas, striking and setting sail countless times adapting to the variable wind conditions that we are experiencing along our way. For the last couple of days everybody showed up for meals and meetings, leaving seasickness behind. During the watches many are already getting to know the ropes, pins and sails, helped by the crew and the amount of sailhandling that have been involved since our departure from Montevideo, as we barely had any stable winds that lasted over a day. Following this tendency, during the morning the wind kept gradually veering to a more WNW-ly direction, and right after coffee time it was time to set the remaining canvas and changing course to a more
Southbound 165º course. Afterwards it didn’t take long for the wind to become N-ly, increasing to over 17kn, moment when the captain decided to jibe to port tack and change course to 145º, keeping us busy on deck for a bit longer. In the middle of the manoeuvre, and with many of us on deck, a group of between 7 and 10 Dusky dolphins showed up and bow-ride the ship for about an hour. Just not to let us relax too much, after lunch we found ourselves sailing at 8 to 9kn under N-ly increasing winds of 24 to 25kn. Several times during the night-watches we kept adapting the sail configuration and the point of sail to the backing winds.