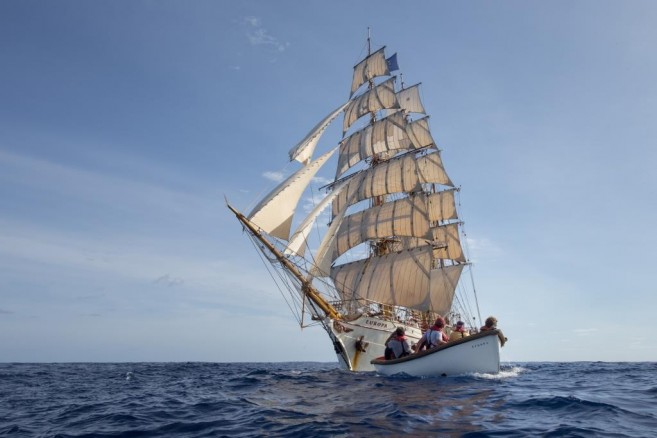 The “Word” for last night and this morning… “No Wind!”

the word of the day

The “Word” for last night and this morning… “No Wind!” Again we dealt with light airs, until finally in the late afternoon and evening, the wind became a gentle breeze and later even growing to a fresh breeze in the evening that gave us speeds of just under 10 knots. A few days ago, our Captain decided not to start the engine anymore, so we are now patiently waiting for the wind to find us. The forecast tells us that this will happen later on during the day or during the night. We all hope so.

Taking advantage of the calm conditions, Klaas decides to launch Sloopy and the Grey-zodiac, a combined exercise for the crew and also a great opportunity for the voyage crew to cruise around the Europa under full sail (only the stuns’ls are missing). The only difficulty was to deal with the swell and time our boarding into Sloopy between the waves. The wind had died down almost completely by then. We could enjoy a few minutes off the ship, carrying our cameras and we could all take great shots of the old lady. Afterwards the three Studding sails were set on Port side in the morning, and we were sailing/drifting on a Southerly course at a maximum speed of 2 knots under NE-ly light airs.

A couple of days ago we experienced similar conditions with the wind backing all the way around the clock, and now we are going experiencing the same phenomenon again. First it dies down, and then backs 360º while it increases. This is a quite exceptional phenomenon in other parts of the world, but it is not uncommon in this area. On the 15th November, but 400 years ago, Schouten and LeMaire wrote on their diaries that they also got the same wind change, going anticlockwise 360º in 24 hours, when sailing a bit ahead of us at 32º S. In the afternoon we set also the three Studding sails on Starboard, now we have six of them set in total.