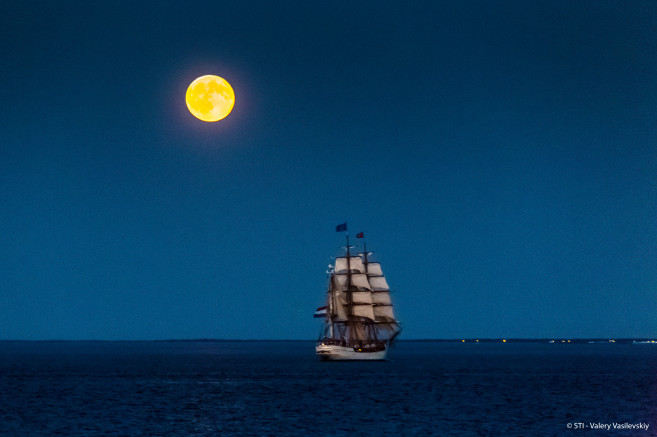 Not even a week ago St Helena wasn't more than a dot on the chart, far far away.
Yesterday it became real: first as yellow blob on the radar, then in form of a larger scale chart on the chart table, later a dark shape off our port bow slowly growing in size and intensity.
It was towards the end of our morning watch when we first spotted the famous Jacob's Ladder, a (very long!!) string of lights connecting the lower town to the upper town exactly 699 steps higher.

Just after sunrise we completed our first 1756 miles of the voyage and dropped anchor in James Bay.
Even though the wind had deserted us already the day before, I doubt that Starboard watch or the Red Watch of the trainees will forget this night watch any time soon.

Scorpio overhead and the Southern Cross off our port quarter by now are as familiar a sight to us as our planets, one by one popping up from the Eastern horizon, neatly in line: first Saturn, then mars, then Jupiter, then Venus, and eventually: the sun.

But instead of adjusting stunsails and doing night jobbies from the bosun, we were getting the anchors ready, shoving the stunsail booms back in, hoisting the courtesy flag for St. Helena and the pretty flags for our ship, dropping and furling sails.
All accompanied by the full moon, illuminating a pretty much glassy calm sea and a set of limp sails.

Half way through the watch, when the cleaning of bar, deck house and whatever else is on the list is done, the deckhands usually come visit me on the bridge for a little coffee break.
I was below in the radioroom finalizing some paperwork when deckhand Iris poked her head in and asked if I had seen the moon.
Sure I had, hard to miss that one when it's full!

But when I came out of the wheelhouse to join my watch on deck, the moon was just a little slither!
We watched the shadow of our planet crawl across the face of the moon until it was just a round slice behind a reddish-black veil.
Meanwhile shooting stars kept crossing the sky leaving us to wish for some time ashore this remote island.

Not often does one accidentally witness a lunar eclipse while approaching St. Helena!
We waved at our shadow on the moon and I swear there they were, four little shapes waving back.