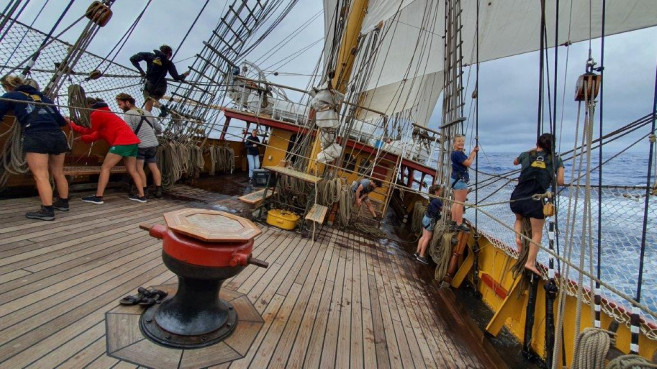 An inviting warm, sunny, dry morning under light winds, invited to continue some of the maintenance projects that already started, such scraping, sanding and varnishing wood appliances on deck. From the ship’s library a loud high pitch hammering could be heard from before breakfast and lasting until about 09:00h. Corrosion has been building up around the metal frames of the portholes and the benign weather made for the crew to start de-rusting them, hands on chipping-hammers. The easy sailing and our speed dropping to 3 to 4kn allowed as well for yet another trawl for the plastics in the ocean scientific project.

But soon the weather situation was about to change dramatically. Clouds stated to cover the blue skies before midday, and by lunchtime the wind rapidly increased from a SE-ly direction. While blowing 20 to 25kn, together with rain and growing swells, permanent crew and the voyage crew members that were up to some excitement, meet on deck to reduce canvas.

Slowly but surely, a known sequence for dousing sails is followed. First, Skysails yards are brought to rest on its lifts, the sails clewed and bunted up. Flying Jib downhaul is pulled hard home, and while being furled, Upper Staysails are brought down too. Mate walks the decks checking around, and a quick look at the deteriorating weather conditions made for the call to drop the Royals, Outer Jib, Gaff Topsail and get Desmond swapped for the smaller Aap. For a while both of those our “monkeys” stay set together before the larger one is ready to be furled.

And then, an army of audacious “12 monkeys” amongst permanent and voyage crews on watch, harness-on, some on shorts, others wearing foul weather gear, climb aloft to put gaskets around all those sails that now were just hanging on their gear, or roam the wet decks coiling the ropes before they get washed overboard through the scoopers on the heeling ship.

Weather, wind and temperature has changed quite a bit during the last days, as we sail south approaching now the Tropic of Capricorn. During the next day we will leave the tropics behind and barely 13 hundred miles will be left to reach our destination.

Europa is entering new sailing areas, leaving behind the regions where for days in a row the sailhandling was reduced to now and then trim a brace or a sheet. For the moment, it seems that the days are gone when all canvas was set sailing on a constant breeze and the steersmen was having an easy job hanging on the wheel, keeping a steady course over calm waters under the blue skies.

A look at the weather charts and forecast reveals an elongated area of relative Low Pressure -a trough- coming from mainland Brazil and moving in a Easterly direction, which accounts for the wind shift and weather change to a cooler temperature.

It was not until late during the night when the wind started to ease, making for the Captain to ask for more canvas. The powerful Outer Jib is hoisted, then the Gaff Topsail, followed by the Royals.

During the last 24 hours, the slow sailing in the morning, the quick weather change and the hours of sailhandling has brought us 106nm closer to Montevideo, on a good 218º course. Now finding ourselves in an area with increasing maritime traffic, cargo and tanker ships share this waters with a large oil-rigs field that require some manoeuvring during the night to clear it at a good 10nm to our Starboard-side.