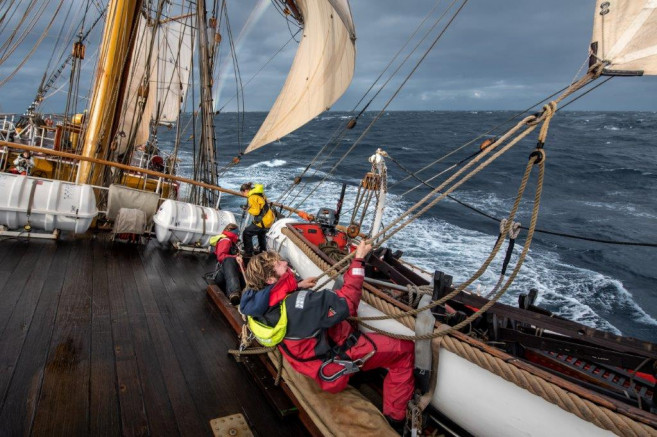 We tie knots. Hundreds of ropes need countless sailors’ knots. The ship
needs them to keep the sails and rig taut. Here, out at sea, we tie
ourselves to sailing the ship across the oceans. We also need them not
to lose a foothold on our lives. We tie knots amongst each other, now
pulled tighter to make the government imposed isolation to prevent the
viral spread more manageable. Where many of our political
representatives and their rule don’t reach, worldwide it seems like
individuals, bound together by a common goal, are achieving cooperative
results to make the situation more tolerable for all. In times of
difficulty, private initiatives seem to work to make closer ties amongst
each other.

The sharp bend in the course of our modern history, produced or
catalysed by the COVID-19 pandemic, has eased or in cases, even
unfastened the knots that we were so sure were strongly lacing up our
futures and ourselves to its path. Now, one way or another, it shows its
unpredictable heading. Some knots will have to be tightened; some of
them may require a new approach.

For many, having lost foothold with life and the diversity of
experiences the planet offers, this future is strongly tied to our
economy and the evolution of our countries, to a senseless ever growing
spiral. Some of its twists may have gone loose now, offering a turning
point for renewed stories, new opportunities to see and understand the
world we live in, new ways of fastening the knots.

There is something called ´the economy´ which is supposed to grow
constantly, although it is never completely clear just what is growing
or to what purpose. Because when you analyse it, you see that it largely
consists of bankers, stockbrokers, lawyers and other speculators orally
pleasuring each other all day. People have no idea what it is that keeps
on growing, yet they spend all their time worrying whether the rate of
growing is faster or slower than they suppose it should be. And then all
of a sudden they find everything has gone pear-shaped, and a period of
national mourning is decreed for the whole country.

What people are actually producing is something the nature of which they
completely fail to understand despite spending all day every day
thinking about it to the exclusion of everything else.
Victor Pelevin. ´Empire V’ The Prince of Hamlet

Sudden turns, unexpected events requiring flexibility and adaptation
keep stubbornly appearing in the path of our lives, and in a way, that
is the hidden beauty of it. We can choose to ignore them, we can choose
to focus our minds on a single drop of water in the immensity of the
oceans or try to have a more global vision, we can choose to face the
new challenges together, or we can choose to deal with them individually.
There’s countless ways to it, but in the end, in a large society, in a
small community, on a sailing ship in the middle of the ocean, or as
single individuals, we all have to wilfully brave the new challenges.

I wish to live deliberately and face only the essential facts of life,
and learn what it has to teach and not, when it comes time to die,
discover that I had not lived.
Henry David Thoreau. ´Walden´

Here we are far from the mass media broadcasting, news, television,
radio or internet, despite the modern technologies available for ships,
we chose to minimize their application on board, and keep our old lady
Europa as close to a traditional Tall Ship as we can in these modern
times, sailing classical routes across the world’s oceans. Our small
society on board lacks many fashionable amenities, easily accessible
whilst ashore, but there is a gain on direct contact with the small
group of people sailing the ship, with the seemingly endless sea, its
inhabitants, the winds and weather systems. And with it, breathe on the
fundamental ingredients that keep us alive and the ship sailing.
The world now has been forced to go through a phase of understanding and
perception of change. We are becoming aware of alterations in our
regular lives that have taken us aback. What might be necessary to
follow is a change of perception about our modern society, our path to
follow, our ways of dealing with sudden issues, the processes to get
more acquainted with the planet we live in. And in between all this,
also the ways of seeing and listening, a way to approach the lands and
seas that would allow them to open to us, instead of forcing our way in.
In these times when it looks like countless are re-discovering the
untamed spaces of this planet, we realize that this wilderness is
indispensable, opening new challenges to balance the human curiosity
about them, with the ever soaring business and economics, and with their
preservation.

The tourism industry we are a part of, also entangled in the curls of a
seemingly ever-growing economic trend, has been struck hard during the
last months. That affects each one of us in different ways. The
increasing number of COVID-19 affected seem to overwhelm all the
nations; population confinement, quarantine, restricted travelling
chances, cancellation of planned voyages, blockage of whole countries
and ports, has pushed Europa to sail to her homeport, letting her, and
with her all the enthusiastic crew on board, to enjoy a good stretch of
the Atlantic Ocean, enduring its changeable sea states, weather and winds.

There is story in that, not for the fact on its own of sailing the ship,
or the bravery of her crew, but mainly for the moment in our lives and
the historical framing of when and why the Europa set sail for the long
distance between Ushuaia and Netherlands.