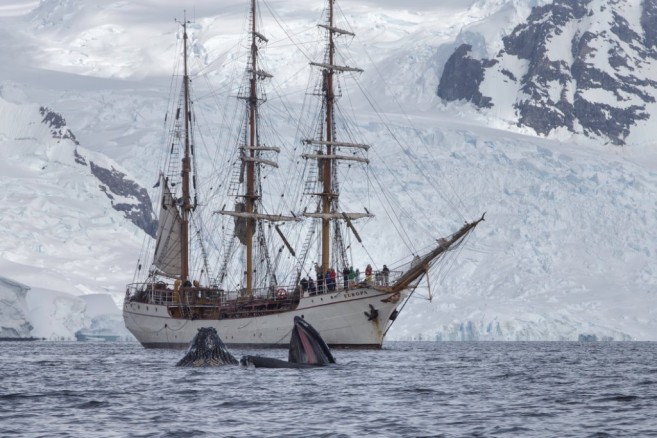 The crack of icebergs and the lone cry of an Antarctic tern echoes through the Graham Strait.

The crack of icebergs and the lone cry of an Antarctic tern echoes through the Graham Strait.  An immature blue eyed cormorant circles twice around Europa and flies away to a floating iceberg. Slowly we drift through the seemingly dead ended Graham Strait. The scene is serene and overwhelming. As soon as we enter open water again we spot some humpback whales in the distance. Is today going to be our whale day?

We get excited by large tails fluking out of the water in the far distance, with beautifully shaped icebergs in the background. This is the onset of a spectacle that we only could have wished for. It is not without a reason that our guests have announced that today, December 28-th is “Whale Day”. For the next eight hours we are watching humpbacks in their communal feeding behaviour on krill, breaching, and fluking tails.  We take our time and stop sailing just to admire one of the largest animals on earth. The humpbacks totally ignored us, and were gorging themselves on the krill rich waters of Antarctica.

Several times they came so close that we almost could have touched them, showing their full length and enormous flippers. We were left in awe. To be almost part of their life, in this stunning landscape, is what makes this voyage an unforgettable experience.