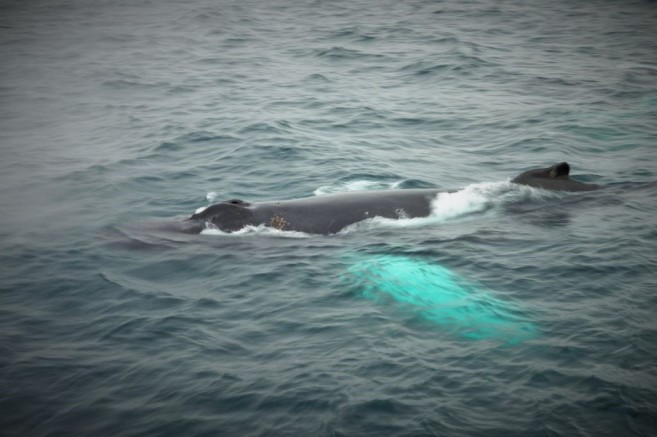 I am in the top of the main mast of EUROPA, bedazzled by ice scapes all around. "Overhead the Albatros hangs motionless upon the air", Pink Floyd echoes in my ear.

Where am I? "Fin del mundo" -- End of the world -- many signs informed us back in Ushuaia, where we set sail. But could this really be the end of the world? After a week heading South we did not fall off, yet...

Rather, it seems the beginning of a new, different world with unfamiliar conditions, landscapes, and creatures.

The elements of nature here produce images that resemble pictures from the Moon, Mars, and Meteorites. Yet, this is part of Earth, maybe even representing the beginning rather than the end of it; a pristine environment in which primary shapes of earth, water, air and light differentiate, take shape and create life.

Here, the contours of earth slowly but firmly emerge. There literally seems no end to this place. And we lose our sense of time, the further South we go. The rhythms of night and day get disrupted. Everything becomes this place. It is humiliating. It eats you. There seems no way back.

Perhaps this environment is best described as a transition zone, in between the world we as humans know of and in which we can survive on the one hand, and on the other the world from which life emerged but from which we have no memory and where we will surely perish now.

Could we be in the womb of mother earth? Literally, here is a no-mans land. The countries of the world have lost their claims. All boundaries have disappeared. Actually there are no countries, at most a few settlements of scientists and explorers like us, who can only survive under artificial conditions, like in a space craft. Some tried to conquer the land and harvest the seas, but found their ships and huts blown away by a cough of nature in violent storms or volcanic eruptions.

But other creatures thrive here. Some even seem rudimentarily human. They walk straight up on two legs, a bit clumsy perhaps, but skillfully manoeuvring like waiters in black and white suits in between the tables of crowded restaurants. They are social beings, closely living together in small villages or smelly cities. And like us they travel a lot.

But they are not human and it is impossible to tell whether they are birds, fish or land animals; they combine features of them all. Other species are equally hard to classify. All the usual differences seem to have disappeared here; between man and animal, between air, water and land, between flying, swimming and walking, between life and death, between reason and imagination. Senses get overloaded and deluded.

Some huge creatures live deep beneath the rolling waves ("in labyrinths of coral caves"?), and occasionally emerge, take a breath of air and make a dance with EUROPA. From the air huge birds glide on top of waves, like hovercraft, and then, disappear with high speed into the fog or sky, or into the water. They do not seem to care. Rocks and heaps of mud along the beach suddenly become alive and hobble into the sea.

The swell of the sea makes everything move, including us. Here, the difference between land, water, ice and air may entirely disappear in endless (over 50) shades of grey, dissolving in mist and silvery clouds. Grey rocks and white ice bergs mingle; the land is covered with streams of snow and glaciers, violently crumbling into ice bergs and pack ice.

Truly, the boundaries between land, water, air and animals are hard to identify here. Even Eric, our captain who is always in control, sometimes seems to hesitate, waiting for the right moment and enjoying his challenge with nature. He always seems to think ‘where are we?’.

Strangely, while all shapes and colors seamlessly fade into each other, they can equally produce extreme contrasts, as with the spectrum of light shining through a glass lens. Ice bergs, painfully white and shiny. The blinding sun shedding light on razor sharp formations of rock or ice, with growing crevasses, until they break with roaring thunders. In such crystals and atmospheres we live. They have just have been created in the laboratories of nature, waiting to erode or melt into softer, rounder and more friendly shapes. Indeed, here the winds, light, movements, sounds, colds and misery can be extreme, but today everything is calm and comfortable.

Yet, nothing is what it seems. Nature is much more differentiated here, temporary, and nuanced, compared to the standard images I started out with at home. In fact this world is changing continuously, so much so that our guide Jordi remains as enthusiastic and curious as the first time he was around here many years ago. He seems always eager, on the edge of ‘vamos’, leading us through the wonders of this world. But this world is beyond comprehension; we can only experience it. With every move of an ice berg, an animal or of ourselves, the scenery changes, forcing us to take new pictures over and over again. The impressions are impossible to cover.

Here, even the full spectrum of colours emerges in the reds, greens, yellows and silvers of the lichens and mosses on land, in the blue and turquoise glosses of sea, krill and ice, in the black and brown tones of volcanic mud, and in the hallucinating orange and golden reflections of the sun and moon on water and ice, which reveal this world to us. I feel reborn.

I fully agree! Thanks, Sytze.