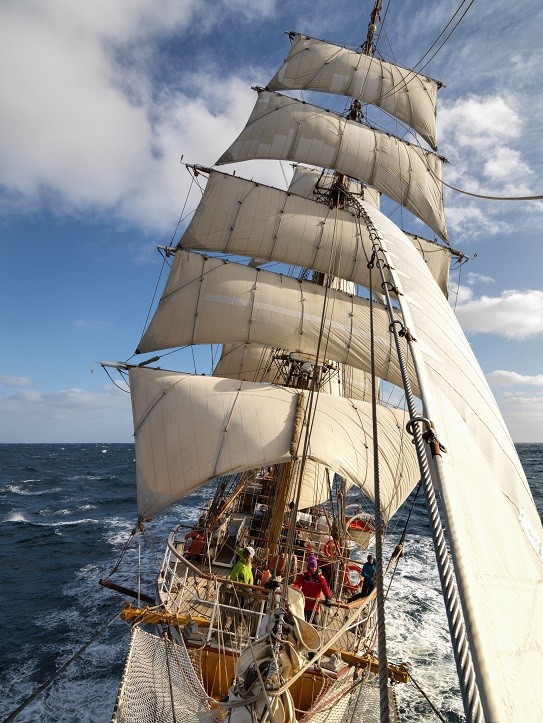 We have a competition going of who have guessed hours and minutes closest to the correct time of arrival, that is, dropping anchor, at either Nightingale Island or Tristan da Cunha. The guesses varies from the 12th over the fourteenth to not dropping anchor at all!

The last suggestion is a bit pessimistic I think, very much hoping to land at Tristan da Cunha with it's in many aspects special way of life. We'll see in some days, that is for sure, as we now have only some 200 Nm to go. The voyage so far has shown a lot of different faces. The start was special with it's frequent squalls of snow, with consequently slippery deck and gale force of the wind, followed by days of very nice sailing in the clear and blue water while we where able to enjoy the beauty and wildlife at sea.

After some days water temperature suddenly rose 5 degrees to 7 degrees C, meaning we were out of the Antarctic Convergence zone for the first time since entering it in the Drake Passage a long time ago... We spotted growlers and icebergs for ages it seemed, looking out wearingly from the bow, especially in the dark hours of the night, but on the morning the fifth day our captain decided that we saw the last one, so that's the way it was. Icebergs are incredibly beautiful, but frightening, so I was not very sad when we where out of their range.

Yesterday we were rocking and rolling again with a NW wind that came up to about 40 knots plus gusts, which meant a tough night especially for those sleeping in the windward bunks! By morning after a front with rain had passed, wind turned to our favour again and is right now SW-erly and the sun that has not been visible for a long time, is once again shining upon us. Different kinds of albatrosses are showing us their magnificent skill of gliding through the air, close to the waves and then up taking turns around our ship. Also petrels and prions contribute to make our journey ultimately enjoyable!

In the pictures it looks beautiful with the icebergs, but I can understand that they could seem dangerous in reality. We think it´s rather cold here, 5-9 degrees mostly, but warm in the house. Who won the competition, hope not they who guessed that you never reached it. Kram från Kerstin