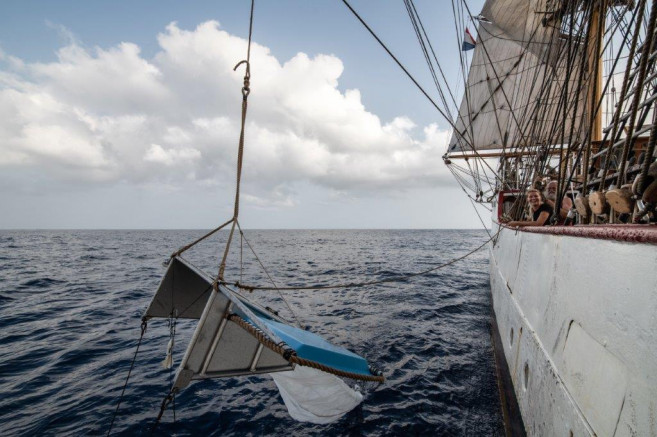 Light airs since the beginning of the new day, again make for the use of the engines to keep some speed. Together with all square canvas set, Europa gently rolls on the low swell at about 3kn, revealing a phosphorescence wake and bow wave.

Tow line, halyard, tack line, all readied for a new nocturnal plankton trawl. Towing a fine mesh net through the waters has been the method used, with more or less refinements, for over two hundred years to sample the smallest forms of plant and animal that live in the ocean. And still doing it in a similar way nowadays and during our trip.

Once the net comes back on board, it is washed and hangs as a long ghostly shape on deck once its cod-end container at the end is unfastened and collected. It never fails that its contents, decanted on a plastic tray, attract the attention and curiosity of whoever is around on watch, eager to discover new and exciting sea creatures.

Each one of the trawls are a source of constant amusement. From the flashing lights of the multitude of bioluminescent organisms to the seemingly endless collection of amazing shapes, sizes, colours and biological features of the sampled life forms.

Driven by evolutionary forces, the adaptations of the countless plankton species to a pelagic life, unfolds a bountiful outspread of magic, bizarre and designs of rare beauty.

The samples consist of a combination of phytoplankton (photosynthetic unicellular organisms, not really visible at naked eye) and zooplankton (including both uni and multicellular organisms). Some of them are organisms that spend their entire lives in the water column (holoplankton), others that spend only a part of their cycle as plankton (meroplankton). The mixture of sizes  is amazing too, spanning over eight orders of magnitude.

Even some abyssal fish seem to leave the deep oceanic waters to surface during the night in search of nourishment amongst the incredibly huge mass of plankton that migrate also upwards in the water column during the dark hours. Richness of the upper oceanic water layers that becomes a daily battlefield for subsistence and reproduction, in which some species use or hide behind what we consider an alluring glittering: bioluminescence, the subject of Fran research project aboard.

Plankton, often considered as a sort of sea-pasture, is the base for the complex structures of its food-web, supporting the staggering diversity of life on the world’s oceans. From microscopical life forms to the largest animals ever to live on planet Earth. An intricate net with connections protracting off the water too: a multitude of links stretching from the photosynthetic micro-organisms that eventually create a suitable planetary atmosphere for more evolved life forms, to the interchanges between land and sea systems through animals like seabirds. For instance, even though many of the large variety of seabirds spend long periods of their lives at sea, every breeding season the nesting colonies ashore count with incalculable number of individuals acting as shackles between the water and the dryland environments of the World.

On our way southwards sailing the East North Atlantic we haven’t been visited by many of them, but Seagulls, Shearwaters, Storm petrels, and today an unidentified Booby have been spotted.

A Wilson storm petrel was found last night on deck, being released in the early morning, and a couple of hours later a Booby spent some time around the ship looking for a good catch of flying fish.

The plankton trawls during the night were not the only ones conducted today. After the morning coffee break Europa sails at a speed of between 3 to 4kn, enough to switch off the engine and get ready for the larger Manta Trawls on micro-plastics project. Researcher and crew member Regitze has been busy reinforcing the trawling frame and mesh-net attachments, always improving designs for better and safer towing.

Already during the third trawl of half hour required by the study methodology, the wind blows at 15kn and Europa’s seem to wake up and speeds up. Under those conditions and with a course straight southwards, it is time for calling hands on deck for sailhandling.

Studding Sails on Starbosarside are lowered to deck, and with the wind practically abeam, braces are pulled a couple of points to port tack, all staysails are hoisted together with the Flying Jib, still keeping three Studdingsails on port side making for a more “knotty” bracing, soon we achieving again speeds between 6 to 7kn. Sailing on this area of tropical and subtropical calms, closing up to the usually windless doldrums and at about 750nm from the Equator, we must take advantage of any chance for good sailing!