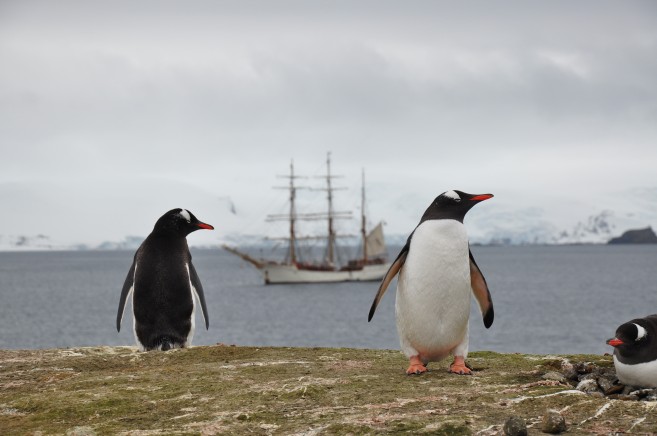 It was a day of rest for us after two days with multiple landings and hikes ashore: zodiac cruising!

It was a day of rest for us after two days with multiple landings and hikes ashore: zodiac cruising! We started the morning by putting all our three adventure boats in the sea: Sloopy, Grey and Blackie zodiacs. Lex took over Blackie, Skinner and Laurits were steering Grey and Annukka kept the tail with Sloopy. People were divided in two groups to go explore Trinity Island "Iceberg graveyard", a shallow area and a narrow channel where the Icebergs tend to get stuck. We saw a gorgeous iceberg sculpture park, and lots of birds gliding above us. Especially the Antarctic terns seem to breed in this area. On the first zodiac tour of the day we had to go against some swell and wind for a bit and that is always fun and exciting, especially with Sloopy. After this slightly wet part was over we were rewarded with hot chocolate and a piece of chocolate each, floating in between the icebergs all together in our boats. We saw crab eater seals relaxing on one of the icebergs and a lovely fur seal that was almost certainly posing for our cameras on a high rock next to the sea; stretching and scratching and showing off its shiny fur.

Seals were also plentiful on the second zodiac tour, by a freaky coincidence we happened to see all four seal species at one go, crab eater seals and one leopard seal were peacefully sharing an iceberg as a Weddell seal was shyly lurking around a nearby rock. A lonely fur seal was further away camouflaging among the beach boulders. Emma and Toby were cruising around in Grey, trying to keep away from the curious leopard seal. Katelinn and Skinner were in Blackie trying to find the perfect piece of ice to put in after-adventure drinks and Annukka made all the 8 horses of Sloopy work hard to cruise around the icebergs. Thank you for our lovely voyage crew who made great efforts fending off ice blocks, doing ice watch and rock watch in the boats (or at least in Sloopy) Good crew! After zodiac touring Annukka gave a lecture on marine mammals, mainly whales that we are hoping to see tomorrow in the Gerlache strait and Wilhelmina Bay. Great turnout, lounge was packed with people wanting to learn something about these giants of the seas. After a good dinner of fish and Keith's Birthday party cake we continued to cruise to Cierva cove, where Captain Eric navigated through icebergs so that we could admire the glaciers, leopard seals resting on ice and look for possible whales. Incredible day in the icy world of Antarctic Peninsula! Happy Birthday Keith!